You may be looking for the documentary.

Winner Takes All was the third novel in the BBC New Series Adventures series. It was written by Jacqueline Rayner and featured the Ninth Doctor and Rose Tyler.

Rose and the Doctor return to present-day Earth, and become intrigued by the latest craze — the video game Death to Mantodeans. Is it as harmless as it seems? And why are so many local people going on holiday and never returning?

Meanwhile, on another world, an alien war is raging. The Quevvils need to find a new means of attacking the ruthless Mantodeans. Searching the galaxy for cunning, warlike but gullible allies, they find the ideal soldiers — on Earth.

Will Rose be able to save her family and friends from the alien threat? And can the Doctor play the game to the end — and win? 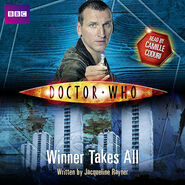