Based on a novel by Kate Orman;
adapted for Audio by Jacqueline Rayner

Walking to Babylon was the third Bernice Summerfield audio drama produced by Big Finish Productions. It was the first in a trilogy of stories known as the "Time Ring Trilogy" whose arc element was the use of Bernice Summerfield and Jason Kane's wedding time rings, given to them when they were married in Happy Endings. Like the previous audio story, this story also features a former Doctor Who television actor, with Elisabeth Sladen playing Ninan-ashtammu.

This story was the first to show photos of the actors on the front cover, with Lisa Bowerman and Elisabeth Sladen both pictured.

"I'm scared of letting all these people down. At least if I get blown up as well, they can say I died heroically. Assuming I ever existed at all."

The People are one of the most technologically advanced races in the Universe - except in the area of time travel. Professor Bernice Summerfield has a time ring. So does her ex-husband Jason Kane. Trouble is, they're their wedding rings, and they won't work unless they're together.

Benny is surprised when Jason turns up to visit her at St Oscar's, especially when she discovers that he has brought one of the People with him. She should have guessed that her good-for-nothing ex wasn't just interested in her company...

Using the time rings, two People create a Time Path and travel back to ancient Babylon, taking an unwilling Jason with them. Benny has just 48 hours to find them and rescue her errant husband, before the People back in the 26th century send a singularity bomb to destroy the Path - and Babylon.

But someone else has discovered the Path and walked to Babylon - Edwardian time sensitive John Lafayette. And Benny discovers her mission has a complication that she never dreamed of - romance. 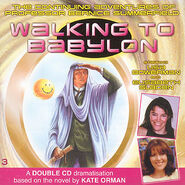 Retrieved from "https://tardis.fandom.com/wiki/Walking_to_Babylon_(audio_story)?oldid=2813441"
Community content is available under CC-BY-SA unless otherwise noted.