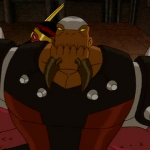 Thanks for becoming a member of the TARDIS crew! If you have any questions, see the Help pages, add a question to one of the Forums or ask on my talk page. -- Revanvolatrelundar (Talk) 11:19, October 5, 2012

Hi! You've been adding information to the continuity sections of Doctor Who episodes, but when you cite the reference, it needs to be italicized. You can check out Tardis:Italics for details on how to italicize titles. Thanks! Shambala108 ☎ 23:35, December 23, 2012 (UTC)

Since you're new here, let me just add that you should review our Signature policy. It's really important that when you use a page that has the word "talk" or "howling" in its title, that you remember to add a signature. If you don't, people have to take an extra step or two to figure out who's left the message. Moreover, when you don't sign a post o user talk page, you are probably ensuring that there will be a delay in answering you, or that you won't get answered at all.
czechout ☎ ✍  15:15: Mon 24 Dec 2012

Hi! I've had to revert or modify many of your recent edits to directors' pages. I strongly suggest you take a look at Tardis:Use sentence case, Tardis:Tardis Manual and Tardis:Game of Rassilon rules. Thanks! Shambala108 ☎ 17:14, December 25, 2012 (UTC)

OK, specifically, when you add the heading "Doctor Who Stories Directed", there are two things that need fixing. First, the "Doctor Who" needs to be italicized. Second, the rest of the line needs to be what the wiki calls sentence case, which means capitalize it as you would a sentence, in other words, "stories" and "directed" would not be capitalized in this case. If you capitalize every word in the heading, it messes things up a bit in ways I don't actually know or understand, I just know not to do it :)

As for the badge editing, it is generally not acceptable to edit only pages that can earn badges. I have seen people warned for doing this. In the case of the directors' pages, I think it's been a badge category for a while, and there's not really much more that can be added to most of the pages. When you add lists of stories directed, if it's only one or two stories, then the list isn't really necessary, as all the information is in the body of the article. Lists of three or more stories are fine.

Sorry, it's me again! I had to remove your plot or edit summaries since they were copied from the Doctor Who Reference Guide. You can read the wiki's policy regarding copying of other works at Tardis:Plagiarism. It's better to just put the plot or summary into your own words. Thanks again! Shambala108 ☎ 20:29, December 27, 2012 (UTC)

I did it because I looked at some of the other pages and I compared and they were copied word from word and I thought it was ok. From now on, I'll put it into my own words.

Yeah, it's definitely possible that there are pages out there that are copied that haven't been caught yet. If you see any more, feel free to either delete the copied content or let someone know who can do it if you aren't sure. Thanks! Shambala108 ☎ 21:23, December 27, 2012 (UTC)

Retrieved from "https://tardis.fandom.com/wiki/User_talk:Vulkanus13?oldid=1635322"
Community content is available under CC-BY-SA unless otherwise noted.