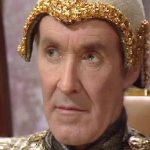 I am the President! Are you a follower of Rassilon? Yes? Then CLEAR OFF!

I am most certainly not head admin — just one of the janitors around here. We typically lock down pages about TV stories until around the time the episode has finished airing on BBC One. You should find Deep Breath (TV story) editable now.
czechout ☎ ✍  00:25: Sun 24 Aug 2014

Hi again :) As you're relatively new to our little community — or at least so it appears given the fact that you only just started contributing at the end of July — it's perhaps useful to review a very basic concept of our site. We don't allow articles to be created about things until the story in which they first appear are released. See T:OFF REL for more detail.

So when you asked, quite early on the 31st August, why there was no article on Danny Pink, the answer is a pretty simple one. No one had created it yet. It hadn't even been 24 hours since the episode was released in the UK. And for people in the United States dependent upon the West Coast BBC America feed, Into the Dalek had literally just finished transmission. If you were dependent upon getting your DW from iTunes, then you were still a couple of hours from Apple making the episode available.

If you've been spoiled on this season, and you already knew who Danny Pink was, then your impatience is probably understandable. But many of our editors won't have especially known that name until they saw Into the Dalek — when it was already 31st August in the UK.

So getting an article started by 5pm British Standard Time on the 31st thus should be seen as pretty darn snappy — particularly because it's a part of this site's DNA that we're not in any way a news service.

I think you'll find going forward that we typically do get articles for most major characters and concepts in new episodes started within about 24 hours of transmission in the UK. But, of course, that's not a promise or a guarantee. Pages are created according to the interests of our editors and at a pace dependent upon the time they have to volunteer.
czechout ☎ ✍  18:34: Mon 01 Sep 2014

As far as I know, there is nothing being planned for any kind of celebration. As you probably noticed, this wiki is undergoing several changes as we help test for a new look for all wikis. This is what is occupying the attention of some of our admins, so they probably haven't thought about the anniversary. Shambala108 ☎ 16:35, February 9, 2015 (UTC)

Hi! Please note that it is a violation of policy to remove another user's comments from your talk page. Please see Tardis:Vandalism#Your own talk page. Thanks. Shambala108 ☎ 19:54, June 16, 2015 (UTC)

You are entitled to your opinion, though I think Tardis:Vandalism policy makes the reasoning behind the rule quite clear. Please note that however much you disagree with the rule, you are still required to follow it. Thanks. Shambala108 ☎ 14:33, June 28, 2015 (UTC)

who even put that rule there in the first place? its not like the messages completely disappear when you remove them you can see them in the history pages so this rule is not necessary no other wiki does this, that rule should be removed. the only thing it does is force people to look at the bad times they've had every time they come to their talk page.--0551E80Y ☎ 06:58, June 29, 2015 (UTC)

If you read the thread I posted, you'll see that non-admins cannot remove unnecessary redirects. Therefore, admins are forced to clean up after non-admins when they move pages. The thread explains all this quite nicely. Shambala108 ☎ 00:01, October 24, 2016 (UTC)

Retrieved from "https://tardis.fandom.com/wiki/User_talk:President_Borusa?oldid=2110477"
Community content is available under CC-BY-SA unless otherwise noted.