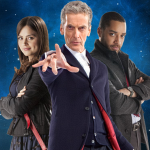 Well, the first acknowledge is that the Short Trips page is basically the exception to the "rule". Most pages display the layout that The Lucy Wilson Mysteries displayed. That said, that's probably because it became more a "format" of stories than one cohesive series (which becomes more evident because it was published by several companies and in different medium and format through the years).

To further difficult the series being put on a "traditional" format is Subscriber Short Trips and Short Trips Rarities, which serve as "sub-series" of Big Finish's Short Trips. All that said, Bernice Summerfield (series) and specially Iris Wildthyme (series) are great examples of pages which cover such shifts in the more commonly used format of tables, with a separate cover gallery.

You've been blocked for a month for violating Tardis:No personal attacks at Thread:255536. These inclusion debates are heated enough. We don't need users accusing others of acting out of "spite", which is a direct personal attack. Shambala108 ☎ 17:00, September 5, 2019 (UTC)

Hey, the Titan Comics' Psychosphere is something I didn't notice when first creating the page, but just as you messaged me I caught up on it. I just dabbed the Cwej one, and will look for a dab term for the Titan one. OncomingStorm12th (talk) 00:12, May 20, 2020 (UTC)

Retrieved from "https://tardis.fandom.com/wiki/User_talk:LilPotato?oldid=2897242"
Community content is available under CC-BY-SA unless otherwise noted.