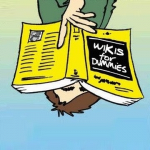 We hope you'll enjoy being a part of our community! If you're new to either us or wiki editing in general, you might want to check out some of these links:

Remember that you should always sign your comments on talk and vote pages using four tildes like this:
~~~~

Thanks for becoming a member of the TARDIS crew! If you have any questions, see the Help pages, add a question to one of the Forums or ask on my user talk page.

Meanwhile in the TARDIS Edit

Before I even read these articles, I gotta ask where you got the names. Is there an actual source for Meanwhile in the TARDIS 1, for example?
czechout ☎ ✍ 16:48: Sat 23 Jun 2012

Okay, I think that you've created these articles in a largely satisfactory way, techniclally. The infoboxes, layout and categories all seem to be fine — with a few provisos that I'll detail below.

The real question, though, is whether the articles should exist at all. As far as I'm aware, the only on-screen title is "Meanwhile in the TARDIS". I'm pretty sure there's no on-screen designation that separates them. The reason the singular Meanwhile in the TARDIS has persisted for so long around here is that there is no alternate title available. Thus, there are a lot of citations done throughout the wiki that simply point to the unified article. To suddenly now have two articles would necessitate some manual relinking. I'm not necessarily opposed to that on grounds of "how much work it will be", but it is concerning to be using a title that we've just made up. The 1 and the 2 are, I think, entirely arbitrary, and assume that you watch them in "disc order", which not everyone does, nor would everyone be obliged to do.

It's a mistake to think that the series 5 extra scenes need to be formatted in the same way as the series 6 ones, because they factually did not have the same format. The series 6 things had individual titles which the series 5 extras did not enjoy. On those grounds I think I favor the merger of your new pages back into the unitary article. However, I can understand the impulse to separate them, so I think you should put the matter up for discussion at Forum:Panopticon.

To offer criticism on just the technical aspects of the writing:

Hope that was helpful and thanks again for your work. Please do remember to start a forum discussion about whether we should keep these two articles. Even if we do decide to revert to a single article, I'm sure your work will be largely preserved in the main.
czechout ☎ ✍ 17:56: Sat 23 Jun 2012

I appreciate the apology, but it's not necessary. I'm quite capable of compartmentalising issues I have with people. I've had strong discussions with Tangerineduel here, for instance, but our working relationship is solid. Maybe we work well with each other because we know we can argue our respective positions with vigour.

That said, I am a little shocked to learn now that you had been in contact with staff through other means. It would have been helpful to have known that a few days ago. It would also have been nice to know that Mathmagician wasn't just threatening Special:Contact, but that he had already done it. Since the issue was already laid before Staff, my efforts to stop escalation were moot, and I was unfairly disadvantaged in the decision-making process.

Since this was an issue in which I was singled out, I was sort of being tried in absentia. I should have been given a chance to lay my arguments directly before Staff, just as you guys did. I needlessly spent time trying to argue that the matter shouldn't even go before Staff, when it was already there. To continue the legal metaphor, I was stuck at arraignment when the trial itself had begun. Had I known that I'd already been tattled on, I would have instead made clear the technical problems in changing the signature, and offered the compromise of me manually signing posts at Central. Overall, this would have been a better solution for everyone.

To the extent I was stubborn, it was likely because I was being told that I had violated the TOU. In no way was that evidently true, as you made clear. So naturally I resisted that. In fact Dopp's ruling doesn't mention the TOU at all, instead preferring to call this a violation of local policy. But because that policy is not written anywhere at Community, how could I have possibly known I had run foul of it?

So on the issue of whether I had done something wrong, of course I was adamant. But that doesn't mean I was unwilling to change my sig. I was simply unwilling to be forced to change on the basis that I had broken a rule.

Had I known that you guys were actually talking to Staff from the off, I would have brought forward the technical objections, not the — for lack of a better term — "legal" ones. That would have led to great flexibility on my part, because I would have offered to sign manually — like I do on all international versions of tardis — Mathmagician would have been okay with that, and it would never have gotten to Staff.

I still strongly maintain that there is never a reason to go to Staff just because a person politely refuses a request made to them. "No" merely means that you have to work harder to make your case. I tried to get Mathmagician to explain to me, in detail, whom I was inconveniencing, but instead he immediately took the view that it was time to involve Staff. And apparently, you, too, went to Staff.

I might not like the way this issue was handled, but it's not caused me to bear you general ill will. I can quite appreciate that you're caught between a rock and a hard place at Community.
czechout ☎ ✍   14:07: Tue 28 Aug 2012

Yeah, I can appreciate why you did it much more than I can understand why Mathmagician pulled the knife. You're an admin on the site; he isn't. It still would have been nice if you'd told me that the matter was already before Staff, but, from an administrative standpoint, I totally accept your rationale.

By the way, for the next few hours at least, this is a good page to look at to demonstrate the problem of the new and old Special:Preferences versions of the signature. You can see the new sig here and the old sig in earlier sections.
czechout ☎ ✍   14:33: Tue 28 Aug 2012

i did not do anything and you just ban me for no reason now that is a very bad admin and very rude so please reconsider yourself --Vannystar ☎ 15:52, October 27, 2012 (UTC)

Sorry about that! I was only testing Fokus yesterday in sitewide wikia.js. I hadn't ever intended for it to be the default condition. Now that it's been verified as working, I've pulled it back to personal js, and put up instructions on how to install it at Forum:Cool optional tool ready for your use. I like it, but I can totally understand how it would get on your nerves.
czechout ☎ ✍  12:35: Tue 13 Nov 2012

Yeah, I've got it so that it won't stop something like, "The Doctor went back to UNIT to look for his TARDIS." But it doesn't like ye olde PAGENAME at all. I probably should change MediaWiki:Abusefilter-warning-shouting so that it's a little more helpful. Whatcha think?
czechout ☎ ✍  21:50: Sat 27 Apr 2013

Sorry: playing catchup on this news a bit. Lot of little things to protect, clear, and hold in place. Should have perhaps done the announcement after having completed the work. You should find the situation at Howling:The Howling clearer now.
czechout ☎ ✍  19:05: Sun 12 May 2013

Retrieved from "https://tardis.fandom.com/wiki/User_talk:Eladkse?oldid=1630335"
Community content is available under CC-BY-SA unless otherwise noted.