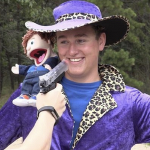 I'm going to post the same thing I'm putting at user talk:StevieGLiverpool. Your enthusiasm is appreciated. However, we take T:SPOIL very seriously here, and T:OFF REL, a subsection of that policy is very clear on when a new story is officially released, and ceased to be a spoiler.

I'm sorry that I had to prevent your editing until around that time. T:SPOIL allows for a much longer block, but I think it'd be far more helpful to simply explain, instead, so you know for next time. In case T:OFF REL, is something you haven't read, or haven't quite understood, allow me to highlight the most important sentence for this:

"By clearly ended, we mean that you should wait, out of an abundance of caution, until the top or bottom of the hour after the end credits roll on the global premiere broadcaster's initial showing of the episode, on their primary broadcasting channel."

In this case, since the episode ended at 8:10 on BBC One, the page for the story may not be created until 8:30, and it's only at that point that you can edit at all based on that story anywhere outside of the series 10 page and The Howling. If the show had ended at 7:50, editing could start at 8. Top or bottom of the hour, for absolute clarity, means the first time a clock would hit :00 or :30 after the time at which the show stops airing.

Thank you for taking this policy seriously, as we do, and for keeping T:OFF REL in mind for next week and beyond. If this is a problem again, consider this a first warning. Your temporary ban will be lifted as soon as I make the page for the ep.
× SOTO (☎/✍/↯) 19:32, April 15, 2017 (UTC)

Retrieved from "https://tardis.fandom.com/wiki/User_talk:CybermanFan?oldid=2203233"
Community content is available under CC-BY-SA unless otherwise noted.