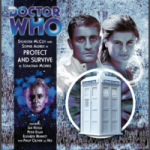 The Hunters of Burning Stone Edit

Sorry, but I don't have a scanner or anything else with which I could capture good images of the comics. However, I would still like to know what pictures you'd like, so that if I ever do get something set up, I can add them. Bubblecamera ☎ 18:53, February 16, 2013 (UTC)

I'd like these images (These are just rough examples of what would be good, I imagen some of these don't even exist.

If you have a good camera (And based off your name I presume that you do) then with the right lighting you can just photograph the comic and it will look presentable. OS25 (talk to me, baby.) 19:19, February 16, 2013 (UTC)

I'm stopping you before you get too far. I'm typing this on a phone, so bare with me. My discussions on the topic with CzechOut have been a little bit all around the wiki, some even on chat, so I don't expect you to know these things.

Okay, so, pretty much, the plan is to make a special template for all audios' and TV stories' filmed or recorded on that day. The list would come from CSS gathered from a new infobox variable. Of course, I've been busy, Czech's been busy, and we're not following through with said plan until I've finished cleaning up day pages/adding info to them.

This means that, temporarily, recording dates will not be appearing on day pages. The only filming/recording dates currently presented at firsts of main ranges/shows. But please know that this is only temporary, and this information will be put front and centre in a neat template once we get to it. I hope to have my project finished by the 50th (23 Nov, obviously). Which reminds me, I should probably get back to work with it. (Once my computer unfreezes, that is...)
--SOTO ☎ 21:11, October 4, 2013 (UTC)

Retrieved from "https://tardis.fandom.com/wiki/User_talk:Bubblecamera?oldid=1629073"
Community content is available under CC-BY-SA unless otherwise noted.