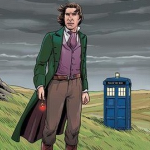 TheChampionOfTime - sometimes called COT or Champ - was a Tardis Wiki editor in the late 2010s....and that's about how far I'll go writing in that style.

I'm the sort that's mostly interested in the non-TV side of Doctor Who. Furthermore, I'm fascinated by the various stories spun-off from Doctor Who which feature characters/species/groups from the series, but not the Doctor.

Favourite pages (that I've made significant contributions to) Edit

Retrieved from "https://tardis.fandom.com/wiki/User:TheChampionOfTime?oldid=2392923"
Community content is available under CC-BY-SA unless otherwise noted.