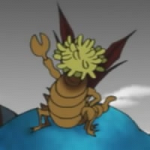 At some point, I may write a proper user page. Until then, how about I explain my avatar? The man in that picture is "that international Judas", Dr. Who, a criminal inventor who menaced King Kong. The original character came from the Rankin/Bass King Kong cartoon and was a short bald man in a white coat. In Japan, Toho Studios' King Kong Escapes (English title), loosely based on the series, featured Dr. Who played by scarecrow-like actor Eisei Amamoto in a cape and white wig. Honestly, I don't remember the hat. One of the other changes in the movie was that Susan was no longer a teenager.

Retrieved from "https://tardis.fandom.com/wiki/User:Nyktimos?oldid=444975"
Community content is available under CC-BY-SA unless otherwise noted.