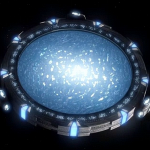 Greetings, I am Matthew R Dunn of the Tau'ri (people of Earth). I am a Doctor Who and Torchwood fan from the UK (though I am not following the Sarah Jane Adventures). I currently spend much of my time on Stargate Wiki. I will make appearances in the hopes of doing some contributions. I live in Wales, the home of the new Doctor Who. I have so far done 729 contributions to this wiki, and counting.

Everything on Doctor Who and Torchwood I own

To be honest, I love pretty much every episode, it is pretty hard to choose.

I'm a modern I guy, I watch mainly the new series. However, I have seen a few episodes of the older series and I liked them. They are (in chronological order by it's original airdate);

Doctor: I'm the Doctor, by the way. And you are?
Rose: Rose.
Doctor: Nice to meet you Rose. (holds up a bomb) Run for your life!

Trinee & Susanna bots: That's the Compact Laser Deluxe. Where did you get it?
Capt. Jack: You don't wanna know.

Martha: I like that. "Humans". Still not convinced you're an alien.
Judoon: (after scanning the Doctor) Non Human.
Martha: Oh my god, you really are.

Jack: Can't I say hello to anyone!?

Jack: (looking at the glass half full as always) Keep longing for the good old British Fish & Chips. But what do I get? Cold mashed swede. Some hotel, last time I book over the Internet.

Copper: We shall be making a visit to old London town in the country of UK, ruled by King Wincesless. They worship the great God, Santa, a creature with fearsome claws, and his wife, Mary. Every Christmas the people of UK go to war with another country called Turkey. They then eat the Turkey people for Christmas dinner, like savages.

Doctor: If you buy the new dictionary, look up genocide. You'll see a picture of my face with a caption that'll say "Over my DEAD body"!!!

Daleks: Daleks do not accept apologies! You will be EXTERMINATED!!

Doctor: (after seeing the contents in Jeff's laptop) Blimey, get a girlfriend, Jeff.

Dalek: Would you care for some tea?

Jack: That is so Welsh!
Gwen: What is?
Jack: I show you something fantastic, you find fault.

Rhys: (holding a chainsaw) You impersonate me mam. You get my girlfriend pregnant, and you've ruined my wedding day. (about to kill alien when the chainsaw suddenly dies) Oh f***.

Rhiannon: What kind of civil servants are you?
Ianto: Unappreciated ones.

I have had a few dreams about the Doctor Who and Torchwood universe.

This is a list of pages and templates (chronologically) I've created since I started working on this wiki, not including my own user page and redirects;

Other wikis you can find me inEdit

Retrieved from "https://tardis.fandom.com/wiki/User:Matthew_R_Dunn?oldid=2156278"
Community content is available under CC-BY-SA unless otherwise noted.