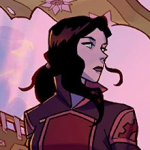 I am Eska, former princess and now co-Chief of the Northern Water Tribe. I can be found here, or at Avatar wiki here and there, or maybe other places. I like to help update after a recent episode has aired and sometimes I will make minor edits when going through articles.

I have some early memories of the Christmas Invasion and Age of Steel, but I started watching Doctor Who properly in 2007. I immediately fell in love with the show and have watched every post-2005 episode and every SJA episode. I've not seen much of Torchwood or the 1963 series however. I have read some novels such as the Stone Rose but my childhood memories are so fuzzy I honestly can't recall anything from them. Trying to get into Big Finish on Spotify. I also have read some comics (particularly from the annuals, or DWM), but again, fuzzy memories.

As the Doctor when I started watching and when I was around ten, I'd say the Tenth Doctor is "my Doctor," but I really like all of the NuWho Doctors, especially the Thirteenth. I've only seen a few Baker and McCoy episodes, but really like them too.

Retrieved from "https://tardis.fandom.com/wiki/User:Kassilon?oldid=2773978"
Community content is available under CC-BY-SA unless otherwise noted.