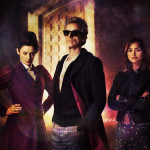 „Have you ever thought what it's like to be wanderers in the Fourth Dimension? Have you?“

Love Doctor Who since 2012/2013. I'm mostly excited over Big Finish audios, 2005-2017 series, and some classic seasons - and I love the fact that Doctor Who is such a large combining universe with history spreading over half a century.

I'm active in the administration of the Russian Doctor Who Wiki, and I like contributing to the TARDIS Data Core too.

One of the main things I enjoy about Doctor Who universe is music by Murray Gold, Blair Mowat and many wonderful Big Finish composers.

I think I'm mostly proud of combining the lists of Big Finish regular cast, writers, directors, composers, cover artists, recasts and audio stories per Doctor, as well as actors that appeared in Game of Thrones, another of my all-time favourite shows.

My high points of Doctor Who hype Edit

Big Finish Bernice Summerfield: Just War • The Grel Escape • The Crystal of Cantus • The End of the World • The Final Amendment • The Adolescence of Time • The Adventure of the Diogenes Damsel • Glory Days • Absence • Dead and Buried • Resurrecting the Past / Escaping the Future • Year Zero • Epoch • Many Happy Returns • The Curse of Fenman • Missing Persons • The Triumph of Sutekh • The Unbound Universe • Ruler of the Universe
Big Finish Torchwood: The Conspiracy • Uncanny Valley • Broken • Made You Look • The Torchwood Archive • Orr • Poker Face • Tagged • Herald of the Dawn • The Death of Captain Jack • Future Pain • See No Evil • Night Watch • Another Man's Shoes • Eye of the Storm
Dalek Empire • I, Davros • Cyberman • Gallifrey • Graceless • The War Master: Only the Good • Mastermind
Iris Wildthyme: Wildthyme at Large • The Panda Invasion • Kronos Vad's History of Earth Vol. 36,379 • Looking for a Friend
Jago & Litefoot: The Mahogany Murderers • The Theatre of Dreams • Swan Song • Chronoclasm • Beautiful Things • The Hourglass Killers • Voyage to Venus • Return of the Repressed • Encore of the Scorchies • The Flying Frenchmen • The Devil's Dicemen • The Year of the Bat • The Museum of Curiosities • The Haunting
Counter-Measures: The Pelage Project • State of Emergency • The Fifth Citadel • Peshka • Unto the Breach • Clean Sweep

Retrieved from "https://tardis.fandom.com/wiki/User:Dmitriy_Volfson?oldid=2850536"
Community content is available under CC-BY-SA unless otherwise noted.