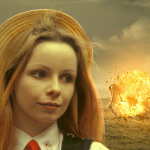 Hi, welcome to my page!

I have been a fan of Doctor Who since I watched Rose, at the age of 5, when it was first broadcast in 2005. Since then I have watched every broadcast main series episode. In total, I have watched 97.63% of television stories (the denominator includes Shada, which I have watched). In terms of Spin offs, I am have Seen K9 and Company and Class, and Torchwood, but have yet to watch much of SJA, and have no plans to watch K9.

TV: (Stories I have yet to watch) Edit

So I've watched every TV serial from The Invasion of Time onwards.

Almost two years ago I discovered the fantastic world of Big Finish through Spotify. I've listened to too much to list at this point!

In terms of books, I've read one book, the excellent Fear of the Dark, along with some comics when I was younger.

Retrieved from "https://tardis.fandom.com/wiki/User:Danochy?oldid=2940251"
Community content is available under CC-BY-SA unless otherwise noted.