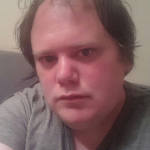 DJ Aitch - not an actual DJ, just a cool name based on my initials (well, no one has convinced me enough that it isn't).

My father was a fan as a child and was among those who first saw the Daleks on TV and was scared of them. So much so, my grandmother took the Dalek away from him. And, apparently, never seen it since.

I was born in 1986, just two months before the transmission of The Trial of a Time Lord. My memories of the transmission of the Seventh Doctor episodes are vague, but was one of the fans from the VHS generation. VHS releases of The Dalek Invasion of Earth, Day of the Daleks, Revenge of the Cybermen, Pyramids of Mars, Death to the Daleks, The Seeds of Death and The Talons of Weng-Chiang are among my early Who memories.

Being a fan during the 16-year hiatus was no easy task, with a lot of my school friends mocking the show for "bad effects and wobbly sets." Yes, sets in classic Doctor Who did wobble, but less than non-Who fans remember. And the effects were only as good as the time it was made in and with little finances and resources at the time. Of course, when Doctor Who came back, I was delighted and still support it now.

It's no secret that I love Big Finish. The Apocalypse Element was my first story, received on Christmas Day 2000. Daleks invading Gallifrey was this fan's dream come true. Little did we know it would serve as a little prequel to the Time War when Doctor Who came back. Sadly I haven't got all 700+ releases, but maybe one day. A regular listener to the Sunday morning podcasts hosted by Nick Briggs and Benji Clifford, which is an absolute delight, giving informative discussions about upcoming releases and a healthy dose of banter for our amusement. And Toby Hadoke's Who's Round is a nice little fun way to donate to charity.

All pages based on Doctor Who Magazine (such as release dates, comic strip releases and short stories releases) are based on DWM 500's Souvenir Special.

I love random trivia and, as a result, have been planning a little project for the last 20 years to release my own reference books, which I planned to title Space-Time Continuity, which will look into continuity references, with a volume looking at spin-off adventures which makes references to the TV series. Fans site such as this helps to keep the research going.

Outside of Who Edit

Born in Harlow, Essex (UK). Originally trained as an actor, now work as a carer and support work for disabled people.

Came out as gay in 2006 around the time of my 20th birthday. Currently single.

Retrieved from "https://tardis.fandom.com/wiki/User:DJAitch?oldid=3026222"
Community content is available under CC-BY-SA unless otherwise noted.