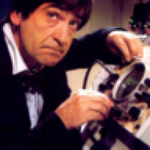 Cosmic Hobo, aside from being a nickname for The Second Doctor, is the Doctor Who wiki handle of Matt Heckler, an amateur musician and writer who used to do a Doctor Who podcast called The Raggedy Podcast with his wife Nuala and Ian Dunbar. Born in 1987, he has spent nearly all of his life in Chicago and its surrounding suburbs, aside from a few season-long visits to Melbourne, Australia. Aside from Doctor Who, his interests include general science fiction, including the writings of Kurt Vonnegut, Philip K. Dick, George Orwell, Ursula K. Le Guin, Paolo Bacigalupi, H.G. Wells, and William Gibson, as well as non-sci fi writers such as Carson McCullers, Franz Kafka, and Jack Kerouac. An audiophile, Matt listens to music of all genres, but has a particular interest in folk, jazz (bebop & cool), and indie rock.

As far as Doctor Who is concerned, he considers the audios and novels canon unless contradicted by the show. His favorite Doctors are the Second and Eleventh on television, and the Eighth and Sixth in audios.

Matt blogs about Doctor Who: http://thecosmichobo.wordpress.com, writes professionally for The MindHut (http://www.themindhut.com), and is the editor and primary writer of literary web magazine Hardcover Wonderland (http://www.hardcoverwonderland.com).

Retrieved from "https://tardis.fandom.com/wiki/User:Cosmic_Hobo?oldid=1444859"
Community content is available under CC-BY-SA unless otherwise noted.