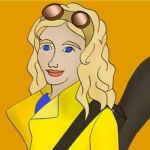 Older than you think

Silence in the Library / Forest of the Dead

Yes, this is kind of like watching Star Trek with a physicist, I am aware of that.

I'm not actually a physicist, I dropped out.

You perhaps should be aware that, totally coincidentally, I frequently drive an ambulance, laugh maniacally, and am looking for my pocket watch. Of course, it's probably actually okay, because I also have a lot of scarves, a long jacket, two cats, and a time machine disguised as a 2006 PT Cruiser with license plate number 13.

It must be a time machine. It's always later when I get out of it.

I'm very new to the Doctor, I saved him for a time when I could truly appreciate him. I love how Doctor Who has made so many other things that I love seem new and wonderful. However, I am most definitely not new to authors from the United Kingdom, obsessive fandom, or excessively convoluted continuity and time travel. The history of my geekdom is studded with Back to the Future, Star Trek, and the genius of Douglas Adams, Grant Morrison, Neil Gaiman, and later, Terry Pratchett.

It was truly only a matter of time.

Difficulty in communication should more likely be blamed on lack of sanity and consumption of too much of the Whedonverse rather than standard 'Muricanism. My British spelling is pretty good, when I'm not too tired, but I'll miss some fiddly points about usage until they show up a few times.

Scranton's in Pennsylvania, and barring a few localisms, we have pretty much the generic US accent. That's probably why they set the US version of The Office there. I try not to fret about bad American accents on Who, I mean, I finally understand what you guys mean about Dick Van Dyke in Mary Poppins. (Thank the heavens for Mark Sheppard and John Barrowman and stop going to New York is all I'll say about that.) Every once in a while, I'll get to correct a misapprehension about the US, and that makes me feel somewhat useful. You'll probably find me trawling science and theory articles, or working on Torchwood.

Where you will find me Edit

Retrieved from "https://tardis.fandom.com/wiki/User:ComicBookGoddess?oldid=1397349"
Community content is available under CC-BY-SA unless otherwise noted.