Ursula Blake was a human from England on Earth.

After the series of alien invasions and similar events leading up to 2007, she joined a group called LINDA with four others who were interested in the Doctor. It was through this group that she met and fell in love with Elton Pope. She was absorbed by the Abzorbaloff, but was later partially returned from the dead by the Doctor's sonic screwdriver in the form of a face embedded in a slab of concrete. She lived out her life with Elton in this state and, despite certain difficulties, the two were quite happy together. (DW: Love & Monsters)

Although Ursula survived, the Doctor felt guilt for leaving her in this state, as he included her in his memories of people who had died in his name, when Davros forced him to remember them(DW: Journey's End). 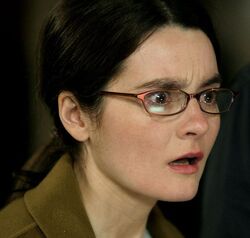