The Traken Union (or Empire of Traken) was a group of five or six allied planets centred around the star system of Mettula Orionsis. (PROSE: Divided Loyalties) At the heart of that system was Traken, the capitol planet of the Empire and the most advanced world in the Union with the most ancient traditions. (AUDIO: Psychodrome) Its leader was the Keeper of Traken, who brought peace to the Union through the power of the Source.

Peace was a major characteristic of the Empire. It was known for its universal harmony. Some said that there was so much goodness that evil died away when it arrived on Traken. The Fourth Doctor once described the Traken Union as "a whole empire held together by people just being terribly nice to each other." (TV: The Keeper of Traken)

With Traken at its centre, the union covered the star system Mettula Orionsis. (TV: The Keeper of Traken) With Serenity being part of the empire, it also covered part of Mutter's Spiral (PROSE: Cold Fusion), or (according to another account) the Silver Devastation, (AUDIO: Cold Fusion) and by extension the Isop Galaxy. (PROSE: The Game of Death)

The Traken Union consisted of the planets Traken (TV: The Keeper of Traken) and Serenity (PROSE: Cold Fusion, AUDIO: The Guardians of Prophecy)

In 1981, entropy built up in the universe and destroyed the Traken Union. (TV: Logopolis) The only remaining Trakenites were Nyssa and the inhabitants of Serenity, the outpost of Trakenites most remote to Traken. (PROSE: Cold Fusion, AUDIO: The Guardians of Prophecy)

Following the fall of the Traken Union, the Benign Union rose in its place, with its capital the planet Serenity. (AUDIO: The Guardians of Prophecy) 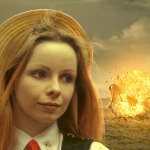