Torchwood Magazine — known formally by the title Torchwood The Official Magazine — was a British magazine about Torchwood published by Titan. It had a run of twenty-five regular issues, along with two yearbooks, cover dated from January 2008 until December 2010. It therefore focused only on the first three series of Torchwood and folded around the time Torchwood: Miracle Day was entering production.

Until August 2016, it was the major source of comic stories involving the characters and situations of Torchwood, before Titan Comics started publishing their own comic series.

The first issue was released on 24 January 2008. A United States version was due to be launched in February 2008, but was not; instead, the UK version was imported to North America for a time (much like Doctor Who Magazine) although it was not widely circulated in North America after early 2009.

Although not connected to Doctor Who Magazine, Torchwood Magazine followed a similar format, featuring behind-the-scenes articles, episode reviews and original fiction in the form of comic strip stories and short stories.

One comic strip arc, Rift War, was later compiled by Titan into a graphic novel and a series of six comics reprinting material from the magazine were due to be released from August 2010.

Initially a four-weekly periodical, it moved to an eight-weekly basis from Issue 14.

The magazine was cancelled in December 2010 after twenty-five issues. According to the editorial note in Issue 24, a realignment of Torchwood merchandising for the BBC/Starz co-production of Series 4 was behind the discontinuation, though it was stated that it was hoped the magazine would resume publication; the magazine has not resumed, with DWM taking on the task of covering Series 4 production and broadcast. The cancellation also resulted in the American Torchwood comic book also being cancelled after six issues, before that title was able to reprint all the fictional material from the magazine. 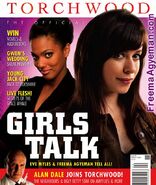