Timelash was a novelisation based on the 1985 television serial Timelash.

The inhabitants of the planet Karfel are suffering under the tyrannical rule of their leader, the Borad, who has brought his world to the brink of interplanetary war.

Those who dare to oppose the will of the Borad are mercilessly sacrificed to the Timelash, a fate considered by many to be worse than death.

When the Doctor arrives on Karfel he soon discovers the Borad's horrifying plan, a plan which will directly affect his young American assistant, Peri...

This Target Book was released as an audiobook on 3 March 2022 complete and unabridged by BBC Audio and read by Colin Baker. 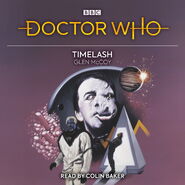