Time and the Rani

The Doctor has regenerated for the sixth time and now the Rani has taken the newly regenerated Doctor prisoner. The Doctor must foil the Rani's evil schemes before all is lost.

The Rani intends to take advantage of an asteroid composed of strange matter which is passing the remote planet of Lakertya. If she can explode the asteroid by colliding it with another mass of strange matter, she can cause a chain reaction which will ultimately result in the creation of a time manipulator. With this device, she will be able to massively change history and rectify the "randomness" of evolution throughout the time-space continuum.

Unfortunately, strange matter is both rare and extremely heavy. In order for her plan to work, she must find a substance which has the same properties as strange matter, but is light enough to be propelled to escape velocity from the surface of the planet. Toward that end, she ties the universe's greatest minds into the single brain that will comprise the core of the time manipulator. Together, she reasons, they must be able to discover a lightweight substitute for strange matter.

One of the geniuses she collects is the Doctor. In his post-regenerative state, however, he's dazed and confused. As he struggles to emerge from his regeneration cycle, Mel encounters the locals who are divided about how best to end the oppressive rule of the Rani and her henchmen, the Tetraps.

DVD, Video and Other Releases

Retrieved from "https://tardis.fandom.com/wiki/Time_and_the_Rani_(TV_story)?oldid=237941"
Community content is available under CC-BY-SA unless otherwise noted.
... more about "Time and the Rani (TV story)"
RDF feed
Has image
File: 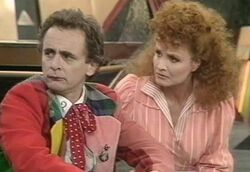