74 (given to later editions)

Time-Flight was a novelisation based on the 1982 television serial Time-Flight.

The Doctor and his companions arrive on Tegan's home planet at a moment of crisis: a Concorde aeroplane has inexplicably vanished while in flight.

The Doctor, Tegan and Nyssa, together with the TARDIS, join the crew of a second Concorde that sets out to simulate the fateful journey of the missing supersonic jet...

Coming back to Earth is not the return to normality that the rescue team might reasonably have expected. Seeing is believing, people say. The Doctor and his friends begin to realise that it just isn't as simple as that...

This Target Book was released as an audiobook on 1 April 2021 complete and unabridged by BBC Audio and read by Peter Davison. 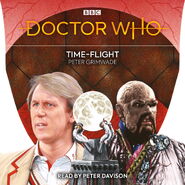