The Witch Hunters was the ninth novel in the BBC Past Doctor Adventures series. It was written by Steve Lyons, released 2 March 1998 and featured the First Doctor, Ian Chesterton, Barbara Wright and Susan Foreman.

It was the first BBC Books novel to feature this line up of Doctor/companions, and the first novel overall since Virgin Publishing's novel The Sorcerer's Apprentice in 1995.

The Reverend Samuel Parris, Minister of Salem, follows three strangers in the forest beyond the village — a forest which is traditionally believed to be the source of much evil. He hears movement through the trees, steps forward and makes a terrible discovery. It is one which will change life in Salem forever.

The TARDIS arrives in Salem Village, Massachusetts, 1692. The Doctor wishes to effect repairs to his ship in peace and privacy, and so his companions — Ian, Barbara and Susan — decide to "live history" for a week or so. But the friendships they make are abruptly broken when the Doctor ushers them away, wary of being overtaken by the tragic events he knows will occur.

Upon learning the terrible truth of the Salem witch trials, Susan is desperate to return — at any price. Her actions lead the TARDIS crew into terrible jeopardy, and her latent telepathy threatens to help the tragedy escalate way out of control...

With the Doctor wanting to repair the TARDIS in peace and quiet, Barbara, Ian and Susan decide to get some experience of living in the nearby village of Salem. But the Doctor knows about the horrors destined to engulf the village and determines that they should leave.

His friends are not impressed. His granddaughter Susan has her own ideas, and is desperate to return, whatever the cost. But perhaps the Doctor was right. Perhaps Susan's actions will lead them all into terrible danger and cause the tragedy that is already unfolding to escalate out of control.

An adventure set in the 17th century Salem Witch Trials, featuring the First Doctor as played by William Hartnell and his companions Susan, Ian, and Barbara. 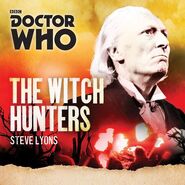