The Wheel of Ice (novel)

The Wheel of Ice

The Wheel of Ice was the first Doctor Who novel to feature one of the incarnations of the Doctor from the "classic series" since Atom Bomb Blues in December 2005. It was also the first since the relatively recent Code of the Krillitanes to centre on a past Doctor, and the first since 2005's World Game to use the Second Doctor.

The Wheel. A ring of ice and steel turning around a moon of Saturn, and home to a mining colony supplying a resource-hungry Earth. It's a bad place to live. Worse to grow up.

The colony has been plagued by problems. Maybe it's just gremlins, just bad luck. But the equipment failures and thefts of resources have been increasing, and there have been stories among the children of mysterious creatures glimpsed aboard the Wheel. Many of the younger workers refuse to go down the warren-like mines anymore. And then sixteen-year-old Phee Laws, surfing Saturn's rings, saves an enigmatic blue box from destruction.

Aboard the Wheel, the Doctor, Jamie and Zoe find a critical situation — and they are suspected by some as the source of the sabotage. They soon find themselves caught in a mystery that goes right back to the creation of the solar system. A mystery that could kill them all. 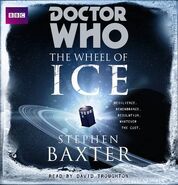