When the TARDIS lands on a deserted volcanic island the Doctor and his companions find themselves kidnapped by primitive sea-people. Taken into the bowels of the earth they discover they are in the lost kingdom of Atlantis.

Offered as sacrifices to the fish-goddess, Amdo, the Doctor and his companions are rescued from the jaws of death by the famous scientist, Zaroff.

But they are still not safe and nor are the people of Atlantis. For Zaroff has a plan, a plan that will make him the greatest scientist of all time - he will raise Atlantis above the waves - even if it means destroying the world...

This Target Book was released as an audiobook on 9 December 2021 complete and unabridged by BBC Audio and read by Anneke Wills. 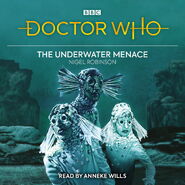