Disturbed by the time travel experiments of the evil Dastari and Chessene, the Time Lords send the second Doctor and Jamie to investigate. Arriving on a station in deep space, they are attacked by a shock force of Sontarans and the Doctor is left for dead.

Across the gulfs of time and space, the sixth Doctor discovers that his former incarnation is very much alive. Together with Peri and Jamie he must rescue his other self before the plans of Dastari and Chessene reach their deadly and shocking conclusion...

This Target Book was released as an audiobook on 3 September 2015 complete and unabridged by BBC Physical Audio and read by Colin Baker. 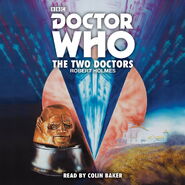