The Doctor has regenerated, having sacrificed his fifth persona to save Peri's life. But things are not going well...

On this occasion the process of regeneration is by no means smooth, for the even-tempered, good-humoured fifth Doctor has given way to a rather disturbed and unsettled successor.

In a particularly irascible moment the new Doctor comes dangerously close to committing a shocking crime. Overwhelmed with guilt for his violent behaviour, the repentant Time Lord decides to become a hermit...

WHY DOESN'T HE UNDERSTAND ME? WHY DOESN'T HE REALISE HOW TERRIFIED I AM? WHY HASN'E HE TOLD ME HE WAS CAPABLE OF SUCH METAMORPHOSIS?

Sacrificing his fifth persona to save Peri's life, the Doctor has regenerated again. But this time his regeneration is by no means smooth, for the new Doctor is strangely disturbed and unsettled in his personality.

In a particularly irascible moment the new Doctor comes dangerously close to committing a shocking crime against Peri. Overwhelmed with guilt for his violent behaviour, the repentant Time Lord decides to become a hermit...

The first story to feature Colin Baker in the role of the Doctor, The Twin Dilemma was written for television by Anthony Steven. This novelization by Eric Saward, one-time script editor of the series and author of several other Doctor Who novelizations and television stories.

This Target Book was released as an audiobook on 5 January 2012 complete and unabridged by BBC Audio and read by Colin Baker. 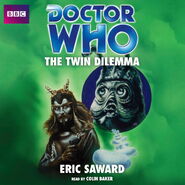