Doctor Who and the Time Warrior

The Time Warrior was the first serial of season 11 of Doctor Who. The story finally revealed the name of the Doctor's home planet as Gallifrey. It also featured the first appearance of the Sontarans, as well as companion Sarah Jane Smith.

Script editor Terrance Dicks gave Robert Holmes the task of writing a story set in a medieval castle. Holmes was less than enthusiastic about this direction, feeling that historical serials were boring, twee, whimsical and relics of the show's original educational mission. Nonetheless, he agreed to Dicks' suggestion of an adventure set in medieval times, provided that it would feature no historical personages and would include a strong science-fictional element. Holmes reversed the roles in giving Dicks the setting of a lighthouse for Horror of Fang Rock in 1977. (DOC: Beginning the End)

The story introduces a new opening sequence that includes a slit-scan "time tunnel" effect. It also introduces a new, diamond-shaped logo. These remained in use until 1980. This is the first story in the series history to refer to each segment as a 'Part' rather than 'Episode'. This remained until the end of the classic series with the exception of Destiny of the Daleks.

When scientists start to go missing in the 20th century, the Doctor is called in by the Brigadier to investigate. His investigations lead him to deduce that they are being kidnapped through time, and he sets off in pursuit, unknowingly kidnapping journalist Sarah Jane Smith in the process.

Arriving in the middle ages, the Doctor and Sarah find themselves caught up in the machinations of the robber baron Irongron and his man from the stars. The alien, a Sontaran named Linx, is arming him with modern weapons in return for helping him repair his damaged ship, and it's up to the Doctor and Sarah to stop him from ruining the Earth's timeline.

In the Middle Ages, the bandit Irongron and his aide Bloodaxe, together with their rabble of criminals, find the crashed spaceship of a Sontaran warrior named Linx. The alien claims Earth for his empire then sets about repairing his ship, offering Irongron "magic weapons" that will make him a king in return for shelter. They strike a bargain, though Irongron remains suspicious of the alien.

The Third Doctor and Brigadier Lethbridge-Stewart are investigating the disappearance of several scientists from a top secret scientific research complex. They do not know Linx has used an osmic projector to send himself forward seven hundred years and has kidnapped the scientists, then hypnotised them into making repairs on his ship. The projector only lets him appear in another time for a brief period but long enough to kidnap the scientists and steal equipment. While the Doctor investigates, he meets an eccentric scientist called Rubeish and a young journalist called Sarah Jane Smith, who has infiltrated the complex by masquerading as her aunt, the virologist Lavinia Smith. Later that evening Rubeish disappears, and the Doctor uses the data he has gathered to pilot the TARDIS back to the Middle Ages, not realising new companion Sarah has stowed away on board.

Irongron is a robber baron who has stolen his castle from an absent nobleman, and relations with his neighbours are appalling. Indeed, the mild Lord Edward of Wessex has been provoked into building an alliance against him and, when this is slow in developing, Lady Eleanor sends the archer Hal on an unsuccessful mission to kill Irongron. When Sarah follows the Doctor to Irongron's castle, she is seized by one of his guards, while the Doctor witnesses Linx removing his helmet.

Irongron is in a foul mood when a captured Sarah is brought before him. His mood improves when Linx presents him with a Robot Knight which is then put to the test on a captured Hal. The archer is only saved when the Doctor intervenes from afar by using a crossbow to shoot the robot control box from Irongron's hands. The ensuing confusion lets both Hal and Sarah flee, and they head for Wessex Castle. There, Sarah concocts a plan to kidnap the Doctor, who she thinks is working for Irongron rather than against him.

Meanwhile the Doctor has realised that Sarah is in the time period and has been captured. He finds Linx's lab, where the kidnapped scientists have been hypnotised except for Rubeish. He is caught by Linx, who restrains him using a head device, but Rubeish frees him when Linx leaves. The Doctor then leaves to search for Sarah, but is chased by Irongron and his men. When the Doctor stumbles, Irongron raises his axe.

Hal shoots the axe out of Irongron's hand, allowing the Doctor to escape. The Doctor is able to convince Sarah and Edward that he was trying to stop Linx and agrees to help construct a defence against an attack on Wessex Castle by Irongron's men.

The next morning, the robber baron and his troops assault the castle using rifles supplied by Linx, scarcely fooled by dummies the Doctor has made to make it appear as though the castle has more soldiers than they do. As they march forward, the Doctor unleashes smoke bombs and stink bombs, which scare them away. The failure further sours the relationship between Linx and Irongron, which has deteriorated since the robot knight fiasco and the point at which the robber saw the Sontaran's true visage beneath his helmet.

The Doctor now decides to lead an attack on Irongron's castle, and he and Sarah enter dressed as friars. He offers to help Linx if he sends the scientists back home, but Linx refuses and shoots the Doctor...

The Doctor isn't harmed, and Linx is rendered immobile when Rubeish, acting on a hint from the Doctor, hits his probic vent (a Sontaran refuelling point on the back of their necks which is also their main weakness). Rubeish and the Doctor use the osmic projector to send the scientists back to the twentieth century. Sarah now inveigles herself into Irongron's kitchen, using the opportunity to drug the food, thereby knocking out Irongron's men.

A recovered Linx now determines his ship is repaired enough to effect a departure. Once more he encounters the Doctor, and they wrestle in combat. A crazed and half drugged Irongron arrives and accuses Linx of betraying him; the Sontaran responds by killing him. As Linx enters his spherical vessel, Hal arrives and shoots him in the probic vent, and the Sontaran warrior falls dead over his controls, triggering the launch mechanism. Knowing the place is about to explode when the shuttle takes off, the Doctor hurries the last of his allies out of the castle. It explodes moments before the Doctor and Sarah depart in the TARDIS.

This story was released as Doctor Who: The Time Warrior.

Box set release: This story was released in the Bred for War DVD box set on 5 May 2008 along with the other classic series Sontaran stories. The DVD is the same as the one sold separately. It was later released in Australia on 8 July.

It was released as issue 53 of Doctor Who DVD Files. 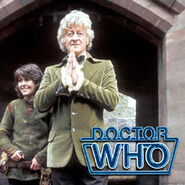 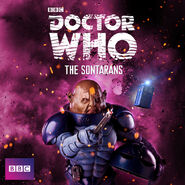 This story was released in compilation form as The Time Warrior in the PAL format in 1989, and was released in Australia several months prior to the UK release. The sleeve of the Australian release credited Elisabeth Sladen and Nicholas Courtney as well as Jon Pertwee.