When the TARDIS materialises on an apparently deserted Northumbrian beach, Steven disputes the Doctor's claim that they have travelled back to the eleventh century. The discovery of a modern wristwatch in a nearby forest merely reinforces his opinion.

But it is 1066, the most important date in English history, and the Doctor's arrival has not gone unnoticed. Observing the appearance of the TARDIS is a mysterious monk who recognises the time-machine for what it is. He also knows that the Doctor poses a serious threat to his master plan - a plan which, if successful, could alter the future of the entire world...

'HOW DO YOU THINK IT WOULD AFFECT GALACTIC HISTORY? THINK IF THE TYRANTS OF THE MIDDLE AGES; IMAGINE THEM ROAMING THE UNIVERSE!'

The TARDIS materialises on a deserted Northumbrian beach. The Doctor says that he and his two companions have arrived in the eleventh century - but Steven finds a modern wristwatch in the nearby forest.

However, the years is AD 1066 and the Doctor's arrival has been noticed by a mysterious monk who recognises the TARDIS as a time machine and its owner as a threat to his carefully laid plans.

The Time Meddler was first broadcast in 1965 and starred William Hartnell as the first incarnation of the Doctor; it has recently been shown again on BBC2. This novelization is by Nigel Robinson, who has written a number of Doctor Who books including Timewyrm: Apocalypse, one of the New Adventures series.

This Target Book was released as an audiobook on 6 October 2016 complete and unabridged by BBC Physical Audio and read by Peter Purves. 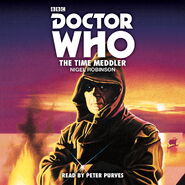