64 (given to later editions)

Jo glanced up at the Doctor. 'Things must be pretty serious then.' 'They are, Jo. Very serious indeed. The whole of the Universe is in danger!'

The most amazing WHO adventure, in which Doctors One, Two and Three cross time and space and come together to fight a ruthlessly dangerous enemy – OMEGA. Once a Time Lord, now exiled to a black hole in space, Omega is seeking a bitter and deadly revenge against the whole Universe...

'I FORBID IT. YOU CANNOT ALLOW THE DOCTOR TO CROSS HIS OWN TIME STREAM AND MEET HIS EARLIER SELF. THE FIRST LAW EXPRESSLEY FORBIDS IT.'

Exiled from his own world, trapped for millennia in a universe of anti-matter, Omega has planned his revenge on his own race, the Time Lords, and on the entire universe...

In order to prevent an unthinkable catastrophe, the Time Lords break the First Law of Time and send the Doctor's previous selves to help...

Doctor Who - The Three Doctors was first broadcast in 1972 and featured William Hartnell, Patrick Troughton and Jon Pertwee in the role of the Doctor. This adventure marked the end of the Doctor's Earthbound adventures and was written by Bob Baker and Dave Martin. This novelization was written by Terrance Dicks who was the Script editor of the series at the time that The Three Doctors was broadcast.

The President of the Time Lords turned triumphantly to the Chancellor. "You see, my Lord? We cannot help the Doctor, but perhaps he can help himself!"

A mysterious black hole is draining away power from the Universe. Even the Time Lords are threatened. The Doctor is also in trouble. Creatures from the black hole besiege UNIT Headquarters. The only person who can help the Doctor is... himself.

Trapped for aeons in the black hole, he now plans to escape - whatever the cost.

This novel is based on a Doctor Who story originally broadcast from 30 December 1972 to 20 January 1973.

Featuring the first three Doctors as played by William Hartnell, Patrick Troughton and Jon Pertwee, together with Jo Grant and the UNIT organisation commanded by Brigadier Lethbridge-Stewart.

The cover to The Three Doctors is partially traced off of the cover of an issue of Marvel's Fantastic Four comic. Despite this, the art is arguably more iconic in Who circles than in those of Marvel, and several other franchise stories have plaid homage to it:

An unabridged audiobook of the story was recorded by Gabriel Woolf for the RNIB in 1978, alongside The Loch Ness Monster and Carnival of Monsters. It was only available to the registered blind. More recently this story was released on 8 April 2010 complete and unabridged by BBC Audio and read by Katy Manning. 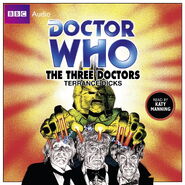