The Stone Rose was the seventh novel in the BBC New Series Adventures series. It was written by Jacqueline Rayner and featured the Tenth Doctor and Rose Tyler.

The book was the first book of the series to feature the Tenth Doctor. Rose continued to be featured as the companion in the series, as she had in the previous six books.

The book was released only two days before David Tennant's first series on Doctor Who, which started its run on 15 April 2006.

Mickey is startled to find a statue of Rose in a museum - a statue that is 2,000 years old. The Doctor realises that this means the TARDIS will shortly take them to ancient Rome, but when it does, he and Rose soon have more on their minds than a sculpture.

While the Doctor searches for a missing boy, Rose befriends a girl who claims to know the future - a girl whose predictions are surprisingly accurate. But then the Doctor stumbles on the hideous truth behind the statue of Rose - and Rose herself learns that you have to be very careful what you wish for...

A 2,000 year old statue of Rose Tyler is a mystery that the Doctor and Rose can only solve by travelling back to the time when it was made. But when they do, they find the mystery is deeper and more complicated than they ever imagined.

While the Doctor searches for a missing boy, Rose befriends a girl who it seems can accurately predict the future. But when the Doctor stumbles on the terrible truth behind the statue, Rose herself learns that you have to be very careful what you wish for.

An adventure set in Roman times, featuring the Tenth Doctor as played by David Tennant and his companion Rose Tyler. 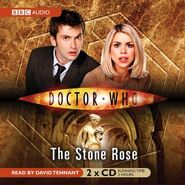