The TARDIS materialises on what, at first sight appears to be a dry and lifeless planet, serving only as a graveyard for spaceships.

Then the TARDIS crew discovers a magnificent museum housing relics from every corner of the galaxy. These have been assembled by the Moroks, a race of cruel conquerors who have invaded the planet Xeros and enslaved its inhabitants.

Upon further exploration the Doctor, Ian, Barbara and Vicki seem to stumble upon the impossible. For suddenly facing them in an exhibit case they find - themselves.

This Target Book was released as an audiobook on 4 February 2016 complete and unabridged by BBC Physical Audio and read by Maureen O'Brien. 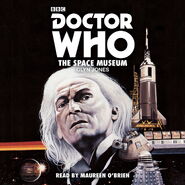