The Slitheen Excursion was the thirty-second novel in the BBC New Series Adventures series. It was written by Simon Guerrier and featured the Tenth Doctor.

1500BC — King Actaeus and his subjects live in mortal fear of the awesome gods who have come to visit their kingdom in ancient Greece. Except the Doctor, visiting with university student June, knows they're not gods at all. They're aliens. For the aliens, it's the perfect holiday — they get to tour the sights of a primitive planet and even take part in local customs. Like gladiatorial games, or hunting down and killing humans who won't be missed. With June's enthusiastic help, the Doctor soon meets the travel agents behind this deadly package holiday company — his old enemies the Slitheen. But can he bring the Slitheen excursion to an end without endangering more lives? And how are events in ancient Greece linked to a modern-day alien plot to destroy what's left of the Parthenon? 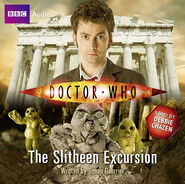