Doctor Who and the Sea-Devils

Barry Letts and Terrance Dicks had decided they wanted a sea-based story and asked Malcolm Hulke to write it. Rather than merely bringing back the Silurians, Hulke invented an aquatic version called the Sea Silurians. Unlike their earlier counterparts, these "Sea Devils" were given clothing, designed by Maggie Fletcher.

To answer the insistence by fans that the Silurian era could not have spawned man-sized life, Hulke introduced a line in which the Doctor says they should correctly be called Eocenes. However, this period was still well in advance of humanoid life.

After the Master appeared in all five stories of season 8, Letts decided to restrict him to a few appearances each year. This story joins him where The Dæmons left off, in prison. The dialogue implies he and the Doctor were once friends.

Letts had secured the involvement of the Royal Air Force for The Mind of Evil and decided to try to do the same with the Royal Navy. He found the Ministry of Defence eager to take part. Many of the extras that played the navy personnel were active duty sailors. Shortly after broadcast, the BBC was visited by officials from the MOD who believed a top-secret submarine had been used in the show. It was in fact a model, adapted to show the features they were secretly testing.

Expensive location filming left The Sea Devils with a budgeting problem. Director Michael Briant's solution was to not hire regular incidental music composer, Dudley Simpson, and have the score created by the BBC Radiophonic Workshop. Malcolm Clarke's electronic score was one of the serial's signatures.[1] Its significance was attested to by its inclusion in 2013's Doctor Who at the Proms, where it was one of five pieces of incidental music performed as representative of the show's original run.

This story saw the only use of the catchphrase "reverse the polarity of the neutron flow" during the Pertwee era. The phrase became associated with the Third Doctor, so he used it again in The Five Doctors some eleven years later, although between seasons 7 and 11 Pertwee did use a shortened version of the phrase, "reverse the polarity", several times.

Like many of Hulke's stories, it included a moral dimension. The Sea Devils are caught between the Master, the Doctor and the humans. Ultimately, they are betrayed by all three; like their land-based cousins, it is the humans who hurt them the most.

The Doctor and Jo visit the Master in his high-security prison on an island off the south coast of England. The governor, Colonel Trenchard, says ships have been disappearing mysteriously at sea. The Doctor discovers that Trenchard and the Master are in league to contact the Sea Devils, a race of reptiles in hibernation in a base beneath the sea, who have been awoken by recent work on a nearby sea fort. The Master intends to use his new allies to help him conquer the world.

The Third Doctor and Jo visit the Master, now a captive on a small island prison after being captured by UNIT.

The Master is being held indefinitely and is the only prisoner. He is watched by CCTV, and the island is patrolled by armed guards — trained to resist the Master's hypnotic powers — and even protected by minefields. He claims to have reformed, but refuses to reveal the location of his TARDIS. As they depart, the old-school, patriotic governor, Colonel Trenchard, tells them that some ships have been disappearing mysteriously. Shortly afterwards, he visits the Master, and it becomes clear that they are in league.

The Doctor cannot resist investigating, so they visit the nearby naval base, HMS Seaspite, run by the efficient Captain John Hart; despite the Doctor's eccentric behaviour — he claims to have known Nelson personally — an alliance forms. The Doctor states that that the linear scorch pattern was caused by a concentrated beam of heat from under the sea. Hart is in charge of the adaptation of the sea fort to a sonar testing station. The Doctor and Jo make their way to the sea fort. While investigating the fort, their boat explodes. They then find the body of one of the maintenance crewman, Hickman. Jo then hears something shuffling towards them.

It is the second crewman, Clark, who is now half-mad. He is ranting about "Sea Devils". The Doctor and Jo try to calm him down. They find that the radio was ripped out. The Doctor decides to go get a transistor radio in order to turn it into a transmitter. On his way, he encounters a hostile reptilian Sea Devil, who fires at him. When it tries to break in, it is injured and flees. Shortly afterwards, the Doctor finishes his transmitter, and they are rescued.

Captain Hart decides to find them after they apparently disappear. The Doctor and Jo attempt to get Hart to tell a higher authority. His assistant gets a call from someone ranting about Sea Devils. The Master comes to HMS Seaspite to steal some equipment, posing as an officer but is caught in the act of robbing the stores by a petty officer but the Master knocks the man unconscious. In the meantime, Colonel Trenchard is providing a distraction by visiting Hart however Jo sees the Master leaving. The alarm is raised but the Master and Trenchard have already escaped.

The Doctor and Jo confront Trenchard, and he tries to dissuade them by showing that the Master is in his cell. The Master knocks out a guard and grabs his knife. Trenchard then gets the Doctor to go and see the Master, who attempts to kill him, first with a gun and then with a sword. The Doctor and the Master engage in a sword fight. The Master then throws a dagger at the back of the Doctor's head....

The Master misses, and the Doctor is unharmed. Trenchard enters and decides to lock the Doctor in the prison and attempts to capture Jo. The Master tells him that he intends to use the reptiles as an army to conquer the planet.

It is revealed that the reason Trenchard is helping the Master is because he believes they are fighting enemy agents. Meanwhile, Jo comes and frees the Doctor. The Master and Trenchard give chase, and the Master uses the machine to summon a Sea Devil from the ocean. The Doctor and Jo are trapped between the Sea Devil, the Master, and a minefield.

The Doctor is forced to employ his sonic screwdriver to repel the Sea Devils by exploding mines on the beach. While the Doctor and Jo navigate through a mine field, a Sea Devil attacks a submarine Hart arranged to be sent to investigate the sinking of the ships. The Doctor and Jo flee to HMS Seaspite, where Hart tells them another naval submarine has disappeared.

Meanwhile, the Master returns to his cell to begin work on a new device. He activates it, and it calls the Sea Devils to him. They attack the prison, killing the guards. A battle for the prison rages. Trenchard, who believed he was aiding his country against enemy agents, is killed.

The Reclaim heads out to investigate a section of seabed. The Doctor goes down in a diving bell. When they offer to pull him up, he refuses; however, his communication system fails, and Captain Hart orders the crew to pull up the diving bell. When it reaches the ship, it is empty...

The Sea Devils take the Doctor to their leader. The Doctor enters the Sea Devils' base and tries to encourage peaceful negotiation, recalling how he had failed to broker an agreement between mankind and the Silurians. The Master arrives to incite matters by trying to provoke war.

Walker, the parliamentary private secretary, arrives to "solve" the sinking ship problem by dropping depth charges. Meanwhile, the Doctor has gained the upper side of the argument — the Sea Devils agree to consider diplomatic relations. The depth charges disrupt the negotiations. The Master convinces the Sea Devils to take the Doctor away and kill him. He also convinces them to attack one of the naval bases.

The Doctor confronts Walker about his depth charges, which have just made the Sea Devils angry. The Sea Devils rise and attack the HMS Seaspite. The Doctor attempts to go to negotiate again. As they round a corner, a Sea Devil appears and raises its gun at them...

The Doctor fights the Sea Devil off with Venusian karate, but another captures him. The rest of the Sea Devils capture the rest of the people at the base. Jo, Captain Hart, and Mr Walker are held in one of the offices at the base. The Master tells the Doctor that he needs help to complete his machine so he can revive the colonies all over the world.

Meanwhile, Jo escapes through a ventilation shaft. She reaches the Doctor, and he tells her that he will deal with the guards; he sends her back to retrieve Captain Hart and Mr Walker. The Doctor makes the machine emit a shrill noise, which puts the Sea Devils in agony. Captain Hart escapes with Jo, but Mr Walker retreats into the office and shuts himself back in when faced with a Sea Devil, even though the creature is incapacitated by the noise from the machine. The Master shuts off the machine, and the Doctor apologises for the "mistake" that caused the noise. The Sea Devils, the Doctor, and the Master head back to the Sea Devil base.

The prisoners retake the base. A soldier arrives, and the Doctor orders him to keep watch over the Master, but the Master hypnotises him and escapes. The Doctor chases after the Master, and they reach the base, where multiple Sea Devils capture them. Meanwhile, Walker orders a nuclear strike. The Doctor sabotages the machine, and the two Time Lords are imprisoned. The Doctor reveals that he reversed the polarity of neutron flow, which will cause a massive explosion. The Time Lords escape by using the Doctor's sonic screwdriver to get out of their cell; they find diving suits and exit the base. They rise to the surface and are rescued just before the base explodes, and the Sea Devils are destroyed.

The rescuers call an ambulance for the Master, who seems to be very ill; however, when the ambulance arrives, they realise that the man is not really the Master, but someone else wearing a disguise — the Master has hypnotised him and forced him to impersonate the Master. They realise that the Master is escaping in a hovercraft. Too late to do anything to stop him, all they can do is bitterly watch their foe taunt them as he scurries away to freedom.

Editing for both the VHS and DVD releases was completed by the Doctor Who Restoration Team.

This story was released on DVD as part of the Beneath the Surface collection along with Doctor Who and the Silurians and Warriors of the Deep.

Beneath the Surface Edit

Beneath the Surface Region 2 cover

Beneath the Surface Region 1 cover

Beneath the Surface Region 4 cover

This story was released on video in episodic format.

A CD of the original television soundtrack was released in January 2008, with linking narration by Katy Manning. It was also included in the Monsters on Earth box set along with Doctor Who and the Silurians and Warriors of the Deep. 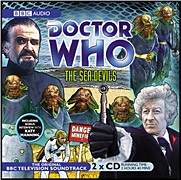 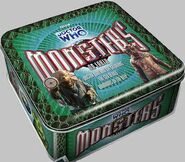 Retrieved from "https://tardis.fandom.com/wiki/The_Sea_Devils_(TV_story)?oldid=3029482"
Community content is available under CC-BY-SA unless otherwise noted.