The Scales of Injustice (novel)

The Scales of Injustice

The Scales of Injustice, later reprinted as Scales of Injustice, was the twenty-fourth novel in the Virgin Missing Adventures series. It was written by Gary Russell and featured the Third Doctor, Liz Shaw and Brigadier Alistair Gordon Lethbridge-Stewart. This novel features Liz's departure from UNIT and the arrival of Mike Yates, reporting for duty. Yates saw his promotion to captain following the events of this story. Further developments in other Doctor Who media would contradict the events of this story.

"And what exactly, Doctor Shaw, do you think C19 does with the dead bodies of plastic dummies, reptile men, primordial throwbacks and all their human victims?"

A little boy goes missing; a policewoman begins drawing cave paintings; and the employees at the mysterious Glasshouse are desperate to keep everyone away — the Doctor suspects it's all down to a group of homo reptilia. His assistant, Liz Shaw, has ideas of her own and has teamed up with a journalist to search for people who don't exist.

While the Brigadier has to cope with UNIT funding, the breakdown of his marriage and Geneva's threats to replace him, the Doctor must find the reptiles alone.

And behind it all lies a conspiracy to exploit UNIT's achievements — a conspiracy reaching deep into the heart of the British government.

When a boy goes missing and a policewoman starts drawing cave paintings, the Doctor suspects the Silurians are back. With the Brigadier distracted by questions about UNIT funding and problems at home, the Doctor swears his assistant Liz Shaw to secrecy and investigates alone.

But Liz has enquiries of her own, teaming up with a journalist to track down people who don't exist. What is the mysterious Glasshouse, and why is it so secret?

As the Silurians wake from their ancient slumber, the Doctor, Liz and the Brigadier are caught up in a conspiracy to exploit UNIT's achievements — a conspiracy that reaches deep into the heart of the British Government.

The e-book version published by the BBC on their website included several illustrations by Daryl Joyce. Titles of illustrations are as they were on BBC's site. 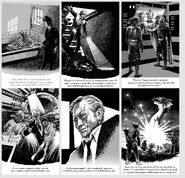 Multiple illustration some with variations

Image one different to image in compilation

The alternate cover for the ebook publication 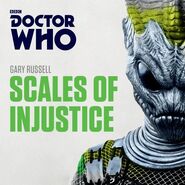