The Sands of Time (novel)

The Sands of Time

The Sands of Time was the twenty-second novel in the Virgin Missing Adventures series. It was written by Justin Richards and featured the Fifth Doctor, Nyssa and Tegan Jovanka.

"If Sutekh had escaped, no power in the universe could have stopped him wreaking havoc and destruction. This time, it's worse."

Arriving in Victorian London, the Fifth Doctor, Nyssa and Tegan run straight into trouble: Nyssa is kidnapped in the British Museum by Egyptian religious fanatics; the Doctor and Tegan are greeted by a stranger who knows more about them than he should and invited to a very strange party.

Why are rooms already booked for the Doctor at the Savoy? How can Lord Kenilworth's butler Atkins be in Egypt and London at the same time? What is the history of the ancient mummy to be unwrapped at Kenilworth's house? And what has all this got to do with Nyssa?

The Doctor's quest for answers leads him across continents and time as an ancient Egyptian prophecy threatens 1990s England. While the Doctor attempts to unravel the plans of the mysterious Sadan Rassul, mummies stalk the night and an ancient terror stirs in its tomb.

The Doctor is in Victorian London with Nyssa and Tegan — a city shrouded in mystery. When Nyssa is kidnapped in the British Museum, the Doctor and Tegan have to unlock the answers to a series of ancient questions.

Their quest leads them across continents and time as an ancient Egyptian prophecy threatens future England. To save Nyssa, the Doctor must foil the plans of the mysterious Sadan Rassul. But as mummies stalk the night, an ancient terror stirs in its tomb.

The BBC e-book of The Sands of Time contained several illustrations by Peter McKinstry. 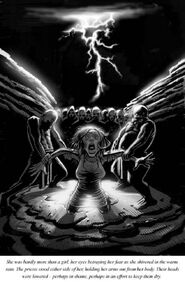 "She was hardly more than a girl, her eyes betraying her fear as she shivered in the warm rain. The Priests stood either side of her holding her arms out from her body. Their heads were lowered - perhaps in shame, perhaps in an effort to keep them dry." 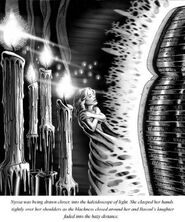 "Nyssa was being drawn closer, into the kaleidoscope of light. She clasped her hands tightly over her shoulders as the blackness closed around her and Rassul's laughter faded into the hazy darkness." 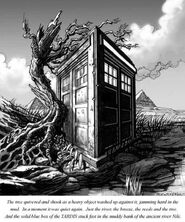 "The tree quivered and shook as a heavy object washed up against it, jamming hard in the mud. In a moment it was quiet again. Just the river, the breeze, the reeds and the tree. And the solid blue box of the TARDIS stuck fast in the muddy bank of the ancient river Nile." 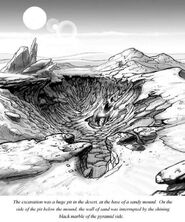 The excavation was a huge pit in the desert, at the base of a sandy mound. On the side of the pit below the mound, the wall of sand was interrupted by the shining black marble of the pyramid side." 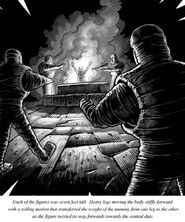 "Each of the figures was seven feet tall. Heavy legs moving the body stiffly forward with a rolling motion that transferred the weight of the mummy from one leg to the other as the figure twisted its way forwards towards the central dais." 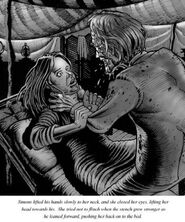 "Simons lifted his hands slowly to her neck and sher closed her eyes, lifting her head towards his. She tried not to flinch when the stench grew stronger as he leaned forward, pushing her back on to the bed." 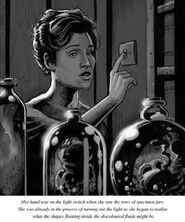 "Her hand was on the light switch when she saw the rows of specimen jars. She was already in the process of turning out the light as she began to realise what the shapes floating inside the discoloured fluids might be." 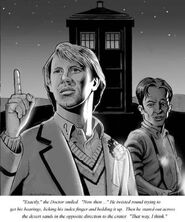 "'Exactly.' the Doctor smiled. 'Now then...' He twisted round trying to get his bearings, licking his index finger and holding it up. Then he stared out across the desert sands in the opposite direction to the crater. 'That way, I think.'" 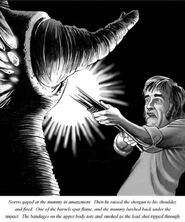 "Norris gaped at the mummy in amazement. Then he raised the shotgun to his shoulder and fired. One of the barrels spat flame and the mummy lurched back under the impact. The bandages on the upper body tore and smoked as the lead shot ripped through." 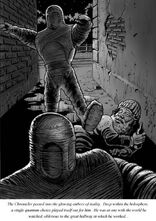 "A drunk stirred in the gutter as one of the massive figures stepped over him. He stared in fuzzy horror at the shape moving above him, then dragged himself to his feet and fled noisily in the opposite direction." 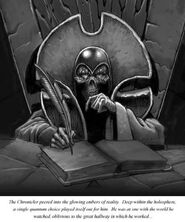 "The Chronicler peered into the glowing embers of reality. Deep within the holosphere, a single quantum choice played itself out for him. He was at one with the world he watched, oblivious to the great hallway in which he worked."

The Target Books-style cover for the ebook