You may be looking for the in-universe version.

The Ruby's Curse was a novel written by Alex Kingston, featuring both River Song and Melody Malone.

She's got ice in her heart and a kiss on her lips...

1939, New York. Private Eye, Melody Malone, is hired to find a stolen ruby, the Eye of Horus. The ruby might hold the secret to the location of Cleopatra's tomb - but everyone who comes into contact with it dies. Can Melody escape the ruby's curse?

1939, New York. River Song, author of the Melody Malone Mysteries, is forced to find a reality-altering weapon, the Eye of Horus - but everyone who comes into contact with it dies. River doesn't believe in curses - but is she wrong?

From the top-security confines of Stormcage to the barbarism of first-century Egypt, River battles to find the Eye of Horus before its powers are used to transform the universe. To succeed, she must team up with a most unlikely ally - her own fictional alter ego, Melody. And together they must solve another mystery: Is fiction changing into fact - or is fact changing into fiction?

This novel was released as an audiobook on 20 May 2021 complete and unabridged by BBC Audio and read by Alex Kingston. 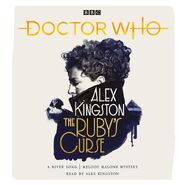