You may be looking for the titular group.

The Roundheads was the sixth novel in the BBC Past Doctor Adventures series. It was written by Mark Gatiss, released 24 November 1997 and featured the Second Doctor, Ben Jackson, Polly Wright and Jamie McCrimmon.

It is December 1648. Although victorious over the Cavaliers in the Civil Wars, the Roundheads are struggling to retain power. Plans are afoot to spirit King Charles from his prison, and the Doctor and his companions become embroiled in the intrigue...

Ben finds himself press-ganged and on board a mysterious ship to Amsterdam. Polly is an unwitting accomplice in the plot to rescue the King, and the Doctor and Jamie find themselves arrested and imprisoned in the Tower of London under suspicion of conspiracy.

Can the Doctor and Jamie escape, manage to find Ben and Polly and still ensure that history remains on its proper course?

With the Civil War won, the Parliamentarians are struggling to hang on to power. But plans are being made to rescue the defeated King Charles from his prison...

With Ben press-ganged and put on board a mysterious ship bound for Amsterdam, Polly becomes an unwitting accomplice in the plot to rescue the King. The Doctor can't help because he and Jamie have been arrested and sent to the Tower of London, charged with conspiracy.

Can the Doctor and Jamie escape, find Ben and rescue Polly – while making sure that history remains on its proper course?

An adventure set in the aftermath of the English Civil War, featuring the Second Doctor as played by Patrick Troughton and his companions Ben, Polly, and Jamie. 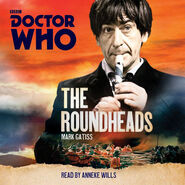