The Robots of Death was the fifth serial of season 14 of Doctor Who. It saw the Super-Voc, Voc and Dum robots make their first, and only, televised appearance. The serial was based on the works of Agatha Christie, with a series of unexplained murders.

The package is stuck, and Chub sends for a robot. V45 arrives but is acting strange. V45 strangles Chub, killing him.

In the corridor, Poul hears Chub scream. He finds Chub's body. Poul goes to the control deck and tells Uvanov about the murder. Uvanov does not want to go to investigate it, as they will loose the storm, but the other crew make him go to investigate. They find a strange object on Chub's hand — a "corpse marker".

The human crew suspects the two time travellers of murdering Chub, and tensions increase when it is found that they have left the room in which they were locked. The Doctor and Leela are separated, with the Doctor finding a second dead man, Kerrill, in a hopper which starts to fill with sand that buries them both...

The Doctor and Uvanov escape and head for the control deck. Someone (presumably Dask, whose responsibilities include robots) shuts down all of the robots whose programming has not been changed, leaving just the killer robots and D84 operational. Looking around the miner, Leela stumbles on Poul hiding in the storage bay: he has gone mad and is suffering from robophobia. She then tracks down Toos in her quarters, who has just been attacked by another rogue robot, and takes her to the control deck to join the Doctor and Uvanov. The human crew are surprised by D84's arrival carrying a near-catatonic Poul, but the Doctor explains the pair's real functions as undercover agents. Looking at his Chief Mover, Uvanov sadly remembers another crewmember losing his mind to robophobia years earlier who ran outside to escape them and died; it was Zilda's brother, hence her accusation of murder. SV7 — whose programming has now also been changed — tells them to come out and die, but Toos and Uvanov decide to defend themselves.

Taren arrives and damages D84, but the robot is able to activate the Doctor's device to destroy a killer robot, knowingly sacrificing itself in the process. Leela releases the helium gas, causing Taren's voice to become high-pitched and squeaky, and Taren is killed by SV7 when it fails to identify his voice pattern. The Doctor then destroys SV7 with a laserson probe.

The robot threat over, and a rescue ship coming to collect the surviving humans, the Doctor and Leela return to the TARDIS and leave the sandminer.

Released as Doctor Who: The Robots of Death, this was the first "proper" title in the BBC DVD range of Doctor Who DVDs. It marked the debut of the "roundel" template that didn't prove popular with fans (although it has remained to date as the DVD template) and is the only one in the range not to feature production subtitles. The continuities were meant to be an Easter Egg, but an error was made by the Authoring House and they were included as a regular menu item. This early DVD release lacks subtitles.

A special edition of The Robots of Death DVD was released on the Revisitations 3 boxset, on 13 February 2012. Other stories in the boxset are The Tomb of the Cybermen and The Three Doctors. The special edition features these extras: 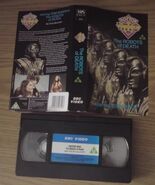 Retrieved from "https://tardis.fandom.com/wiki/The_Robots_of_Death_(TV_story)?oldid=2835507"
Community content is available under CC-BY-SA unless otherwise noted.