The Revenge of the Cybermen (novelisation)

The Revenge of the Cybermen

Revenge of the Cybermen

A mysterious plague strikes Space Beacon Nerva, killing its victims within minutes. When DOCTOR WHO lands, only four humans remain alive. One of these seems to be in league with the nearby planet of gold, Voga... Or is he in fact working for the dreaded CYBERMEN, who are now determined to finally destroy their old enemies, the VOGANS?

The Doctor, Sarah and Harry find themselves caught in the midst of a terrifying struggle to death – between the ruthless, power-hungry Cybermen and the desperate determined Vogans.

THE CYBERMEN. 'THEY'RE TOTALLY RUTHLESS, WITH A GREAT DETERMINATION TO SURVIVE, AND TO CONQURE. THEY WON'T HAVE FORGIVEN MANKIND.'

Transported by the Time Ring given to the Doctor by the Time Lords, the Doctor, Sarah Jane and Harry Sullivan find themselves returned to the spaceship that was the scene of The Ark in Space, also available as a Target novelization.

They find it deserted, the crew struck down by a mysterious 'space plague'. And on board are the Cybermats, lethal war machines which wait for their masters, the Cybermen, to come to wreak their revenge...

Doctor Who - Revenge of the Cybermen was written by Gerry Davis, the creator of the Cybermen, and this novelization is by Terrance Dicks, who was script editor of the series for five years.

This Target Book was released as an audiobook on 3 February 2022 complete and unabridged by BBC Audio and read by Nicholas Briggs. 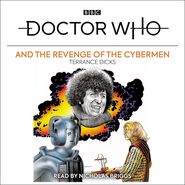 Doctor Who and the Revenge of the Cybermen