The Return of the Vostok

The Return of the Vostok was an online Torchwood comic strip.

While out for ice skating, the Torchwood Three team discover a menace lurking at the bottom of a frozen pond. Creatures called Vostok are threatening to bring about a new Ice Age. Their biology allows them to literally suck the warmth out of an environment, but Jack suggests they may be attacking Cardiff intentionally. He believes they mean to use the Rift to "broadcast" an Ice Age back through time, allowing them to substantially rewrite human history. The team race against the sudden cold snap to find a way to overcome the threat. In the end, Jack and Owen lead the Vostok to a disused Cardiff warehouse doused with fuel. Once there, a simple lit match disposes of the Vostok threat. 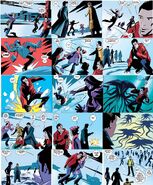 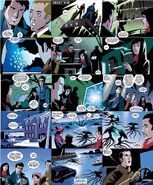 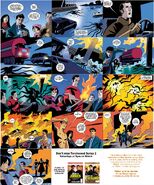 ( User note: The online Watch site (see external link below), gives one frame per page. To view the above as page images, click on the page image and double click on the file image to zoom up)

Retrieved from "https://tardis.fandom.com/wiki/The_Return_of_the_Vostok_(comic_story)?oldid=2985980"
Community content is available under CC-BY-SA unless otherwise noted.
... more about "The Return of the Vostok (comic story)"
RDF feed
Has image
File:ReturnOfTheVostok.jpg +
Publisher
UKTV +