The Rani was a short-lived series produced by Bill Baggs and published by BBV Productions. Its first and only audio story was released in 2000: The Rani Reaps the Whirlwind, which saw Kate O'Mara reprising her role as the original incarnation of the Rani for the last time. During a 2021 attempt to continue the series as The Rani Adventures, BBV Productions released a novelisation of and a documentary about The Rani Reaps the Whirlwind, but no further stories were released.

Following Big Finish's acquisition of the Doctor Who license and the beginning of The Monthly Adventures in 1999, BBV Productions – which, until this point, had focused on independent stories featuring Doctor Who cast – secured the rights to a number of Doctor Who villains, including the Rani.

Pip and Jane Baker wrote a number of audio scripts featuring the Rani for BBV Productions, the first of which was titled The Rani Reaps the Whirlwind. The audio was recorded in a radio station near Kate O'Mara's house on 20 September 2000 and released that November as the penultimate story of series 3 of Audio Adventures in Time & Space. While O'Mara was enthusiastic to record further stories for BBV, due to poor reviews and sales, none of the Bakers' other scripts were produced.[1]

In 2021, BBV Productions resumed its release of Rani content, publishing an interview with Kate O'Mara alongside a rerelease of The Rani Reaps the Whirlwind with a new cover. Bill Baggs entered negotiations with the Bakers' heirs to reacquire the rights to the character for The Rani Adventures, a series of novels adapting the Bakers' unproduced scripts as well as new stories like Helix with the Rani's new third incarnation. Baggs also planned to include the Rani in Faction Paradox: Dionus's War audios.

Ultimately, the rights reacquisition deal failed. Baggs's Dionus's War audio featuring the Rani, Me & My Ghost, was rewritten to instead feature "Nari"; and while the novelisation of The Rani Reaps the Whirlwind was released in September 2021, the planned regeneration scene of Kate O'Mara's Rani into her successor wasn't included.[2] 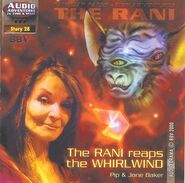 The Rani Reaps the Whirlwind (1) 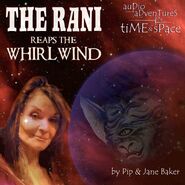 The Rani Reaps the Whirlwind (2) 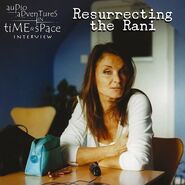