The Quest of the Engineer (audio story)

The Quest of the Engineer was the fourth story in the ninth series of The Fourth Doctor Adventures, produced by Big Finish Productions. It was written by Andrew Smith and featured Tom Baker as the Fourth Doctor, Lalla Ward as Romana II, Matthew Waterhouse as Adric and John Leeson as K9 Mark II.

The TARDIS crew's attempts to escape E-Space lead them to a strange planet with a surface that shifts and changes constantly.

Losing their ship down a fissure, they venture into the depths of this world and encounter the man who rules this place – a man known only as 'the Engineer'. He tells them that he’s on a quest for illumination, and to find a rumoured portal in space that may lead to another reality, with knowledge unknown in this universe.

It seems he may be on the same quest as the Doctor and his friends. But can he be trusted? And who is he really? 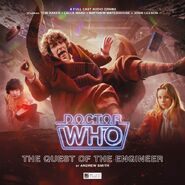 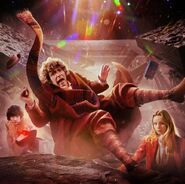