The Poison Sky was the fifth episode of series 4 of Doctor Who.

It was the only episode of the season to not reference the Missing Planets arc. It saw the Doctor's life saved again by and at the cost of the life of another person; it was also another moment where his desire to spare his enemies overrides his logic, as he knew Sontarans wouldn't back off if threatened. There was also a second, fleetingly brief cameo made by Billie Piper as Rose Tyler, foreshadowing a major story arc development ahead.

This episode left a loose end about the Sontarans' defeat that was used in The Sarah Jane Adventures television story The Last Sontaran.

As shown in Donna's World in Turn Left, members of Torchwood Three (Ianto Jones and Gwen Cooper) would have given their lives in Luke Rattigan's place. However, even worse would be Captain Jack being transported to the Sontar, leaving the Earth without any more defenders against the aliens' invasions.

As the poisonous gas from the Tenth Sontaran Battle Fleet's ATMOS continues to thicken throughout the world, purging humanity one country after the next, a clone of Martha Jones works in the shadows to support them. Will the Tenth Doctor learn about Martha's replacement? And can he figure out what the gas is made of, and destroy it before the entire planet chokes to death? More importantly, can the Doctor stop UNIT from starting an interplanetary war with the deadly Sontarans? It's all down to Donna Noble and child genius Luke Rattigan to fix things before it's too late.

The Tenth Doctor continues sonicking the car in his attempt to free Wilf from it before he chokes on the gas. However, it proves useless as Sylvia frees Wilf from the car by smashing the window with an axe she keeps in case of burglars. Ross arrives in a taxi, the only thing he could find not fitted with ATMOS. Despite Sylvia's protests, Donna goes with the Doctor back to the ATMOS factory with her grandfather's support.

Arriving at the factory, the Doctor gives Donna a key to the TARDIS so she can wait without choking on the air. Donna manages to enter the TARDIS just as she began coughing hard from the gas. In the meantime, Clone Martha overhears a radio transmission of the Doctor's arrival and tells Colonel Mace the previous message the Doctor gave her: Code Red Sontaran. Rushing into the mobile base, the Doctor tells Mace not to engage the Sontarans in battle. When questioned about what he plans to do, the Doctor says he'll use the TARDIS to get on their ship to talk with them.

Martha's clone subtly gives orders to the hypnotised UNIT soldiers Harris and Gray to put teleport relays on the TARDIS for the Sontarans to beam it up. Once done, Donna feels a shake from the teleport. The Sontarans gloat over having the Doctor's infamous vessel. The Doctor and Clone Martha arrive to find the TARDIS gone. Knowing he is trapped, the Doctor tries to goad the Sontarans into revealing their plan. The Sontarans do not fall prey to this ploy, but they move the TARDIS out of the main war room, placing Donna in a position to help.

Against the Doctor's advice, UNIT decides to use nuclear weapons against the Sontarans; however, Martha's clone has covertly copied the launch codes and stops every attempt they make to fire the weapons. The Sontarans mobilise troops to retrieve and protect the clone. With the Sontarans' ability to jam most conventional firearms by expanding the copper-lined bullets, the UNIT troops are quickly slaughtered and the factory is secured.

Rattigan leaves the Sontaran flagship to gather his students. He plans to take them to another planet, Castor 36, and begin the human race anew; everything they were building was the foundation of said new world. The students laugh him off; he attempts to keep them from leaving by brandishing a gun. However, when Rattigan shows no initiative to use it, they leave. Rattigan returns to the ship to report his failure, only to then learn from the Sontarans that he was only needed to install ATMOS and that they had no further plans for the students beyond using them for target practice. Rattigan teleports back to his mansion before they can kill him, and the Sontarans lock the teleport pods.

Meanwhile, the Doctor instructs Donna to reopen the teleport pods. Everyone puts on gas masks, even the Doctor, who can't resist remembering the Empty Child. Mace calls down the Valiant, whose engines are strong enough to clear the area around the factory; this is enough to impress the Doctor. A Sunglider weapon — smaller than that used against the Sycorax — is their main offence, killing many Sontarans in the blast, and with steel-encased bullets in lieu of copper, they begin a successful retaliatory strike, during which Colonel Mace personally confronts and executes Commander Skorr with a pistol.

The Doctor makes his way to the cloning room where Martha is being held. Having figured out long before the clone wasn't the genuine article, as she quite smells bad to non-humans, he severs its connection to Martha, leaving it to die. Martha convinces the clone to betray the Sontarans in its last moments. The clone reveals that the poison gas is actually "clone feed" for Sontaran clones: they are converting the planet into a giant breeding world. With Donna's help, the Doctor reactivates the teleport pods, rescues Donna, steals back the TARDIS, and teleports into Rattigan's mansion.

With Rattigan's equipment, the Doctor builds an atmospheric converter, igniting the atmosphere to clear out the poison gas, much to the delight of UNIT and the rest of humanity; Wilf and Sylvia come out of their house and start cheering along with their neighbours, while Captain Marion Price kisses Colonel Mace as the UNIT soldiers cheer their victory, though she quickly composes herself. However, he knows the Sontarans won't accept defeat so easily — they are beginning their standard invasion stratagem.

The Doctor tells Donna and Martha to lead good lives, tells Rattigan to go on and do something clever, and teleports to their ship with the converter to give them the choice between retreat and death. The Sontarans choose the latter, as a countdown begins. The Doctor threatens that he will do it, but Staal defiantly tells him the Sontarans do not fear death. The begin chanting "Sontar-ha!" However, with a few seconds left, Rattigan simultaneously teleports himself to the Sontaran ship and the Doctor back to Earth. The Sontarans stop their chant with the new development. Luke says "Sontar? Ha!" and triggers the device. The explosion blows out the windows of the bridge, killing Staal and Rattigan, before consuming the entire ship; the resultant shockwave destroys most of the Sontaran space pods launching from the main vessel.

With the day saved, the Doctor and Donna say their goodbyes to Martha, only to have the TARDIS spring to life and begin piloting itself to places unknown before she can leave, the Doctor's hand jar bubbling... 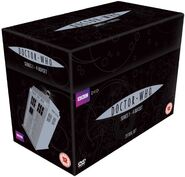 Doctor Who: The Complete Series One to Four DVD box-set

The Sontarans Box-Set
Bbcdvd-series1234567.jpg
Doctor Who: The Complete Series One to Seven DVD box-set