James Goss, based on a story by Douglas Adams

A different version of the novelisation was published again by Target Books on 11 March 2021 under the new title of Doctor Who and the Pirate Planet. Unlike the 2017 edition, which is based Douglas Adams' first draft scripts, the 2021 release adapts the televised version.

'Yes, it was the supreme fragment of the precious universe, yes, it could restore the balance between good and evil in this one, but really ... did there have to be six pieces of it?'

The classic DOCTOR WHO adventure by Douglas Adams, novelised by James Goss.

The hugely powerful Key to Time has been split into six segments, all of which have been disguised and hidden throughout time and space. Now the even more powerful White Guardian wants the Doctor to find the pieces.

With the first segment successfully retrieved, the Doctor, Romana and K-9 trace the second segment of the Key to the planet Calufrax. But when they arrive at exactly the right point in space, they find themselves on exactly the wrong planet – Zanak.

Ruled by the mysterious "Captain", Zanak is a happy and prosperous planet. Mostly. If the mines run out of valuable minerals and gems then the Captain merely announces a New Golden Age and they fill up again. It's an economic miracle – so obviously something's very wrong...

Aboard the TARDIS: The Doctor, Romana, and K-9 scour the galaxy in search of six seemingly lost pieces of the incredibly powerful Key to Time.

They soon locate a fragment in the outer reaches of the universe on the happy and prosperous planet of Zanak. Once outside, however, they quickly realise they're in the wrong place at exactly the right time.

The planet is entering yet another New Golden Age with enough gems and minerals for every residents. So, obviously, something is very, very wrong.

rest to be added

THE CHANGING FACE OF DOCTOR WHO - This book portrays the Fourth Doctor, whose physical appearance later transformed as the Black Guardian finally caught up with him.

THE CHANGING FACE OF THE KEY TO TIME - This book portrays the Second Segment of the Key to Time, which has been waiting for the Doctor for a very long while.

This novel was released as an audiobook on 5 January 2017 complete and unabridged by BBC Audio and read by Jon Culshaw. 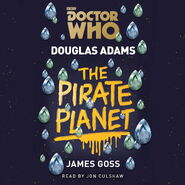