The Doctor and Romana learn the second segment of the Key to Time is on the planet Calufrax. Yet they arrive on a planet called Zanak, which has been hollowed out and fitted with hyperspace engines, allowing its insane, half-robot Captain to materialise it around smaller planets and plunder their resources.

On a mountain base, the nervous Mr Fibuli informs the impatient Captain that a new source has been found for vasilium. Immediate orders to mine it follow. The Captain speaks to the people of the planet, declaring a new golden age. As the people celebrate, a different group, dressed in yellow robes, mentally watch Pralix, who appears less thrilled with the Captain's announcement than everybody else.

In the TARDIS, the Fourth Doctor is securing the first segment of the Key to Time by tucking it in a boot and sticking it in the fridge. The tracer points Romana I and him to the cold and boring planet of Calufrax. The TARDIS is unable to materialise (damaging Zanak's engines as well) until Romana pilots it into a landing. The pair soon discover that they are not on Calufrax at all.

Meanwhile, Pralix is now delirious, watched over by his grandfather Balaton, sister Mula and friend Kimus. Balaton is concerned that his rantings will be overheard.

The area in which the Doctor and his entourage have landed is deserted until they meet a local who tells them that the people of his planet will be rich because of the Captain and his latest "golden age of prosperity." He gives Romana some diamonds and rubies, saying they can be found everywhere. He warns the Doctor and her about the Mentiads, then leaves before he can elaborate. The Doctor finds precious stones all around, including the extremely rare oolion.

Balaton is terrified that Pralix will be taken by the Mentiads. Kimus is sceptical, and Mula remembers her father's death at the hands of the Captain's guards, ostensibly to save him from the Mentiads. Meanwhile, the Mentiads declare their "harvest" of Pralix is imminent. As they march across the fields of Zanak, the Doctor hears Pralix and sets off to investigate. Romana waits behind, surveying the Captain's fortress with a telescope, only to be arrested for that forbidden item and her forbidden question: "Why?"

The Captain sends more of his soldiers to stop the Mentiads, but weapons are useless against their psychic powers. Instead, the Captain sends troops to find the telepath and eliminate him before the Mentiads find them first. They burst in on the Doctor in Pralix's home, but K9 quickly stuns them. The Mentiads enter soon after and strike down the Doctor with a blast of mental energy...

When the Doctor wakes, Pralix and the Mentiads are gone. K9 tells him of Romana's arrest, giving him an incentive to try to get to the bridge atop the mountain, where she has been taken by the guard. Kimus accompanies him, hoping to rescue Pralix from the Mentiads. They get up to the mountain in an air car. Meanwhile, Mula and K9 track the Mentiads in an attempt to find Pralix.

On the bridge, Fibuli breaks the news to the Captain that the macromat field integrator has burnt out and they cannot replace it themselves. He suggests one more jump to find mineral PJX 1-8, which would do the same job as the integrator. Romana is brought to the bridge, and the Doctor also finds his way up. The Captain, taking no chances, as guns trained on them as he encourages them to lend technical assistance. Romana is confused that the tracer gives out a continuous signal wherever they go. The Doctor realises what is going on--and it horrifies him. After they escape with Kimus and make their way underground, they find the ground beneath them is frozen. The Doctor explains the planet they are on, Zanak, has been hollowed out and fitted with engines so it can transmat through space and materialise around others — such as Calufrax — to plunder their mineral wealth.

The Doctor, Romana and Kimus have no time to pause as the Captain's guards give chase from behind. As they run, they face a group of Mentiads who say they have come for the Doctor.

The Mentiads are friendly, and have come to save the Doctor and his friends from the guards. The Mentiads, now including Pralix, create a force field with their psychic powers. This power of the Mentiads will not last much longer. Zanak has come to Calufrax for its crystals. When refined, they can be used to block their psychic abilities. Though the Doctor does not yet know it, the Captain is planning to materialise Zanak around Earth after mining on Calufrax is finished, because mineral PJX 1-8 (quartz) has been located there.

The Mentiads tell the Doctor that Zanak was a prosperous planet until the reign of Queen Xanxia, who supposedly had mysterious powers. Galactic wars she waged were the ruin of Zanak and its people.

The Doctor and Kimus fail to steal an air car and are taken to the bridge. The Captain shows the Doctor his trophy room of crushed remains of planets. The Doctor's secret plan is to break into the engine room, but whilst he is looking for it, Kimus and he find a room with an old body connected to a time dam, used to slow down the flow of time, using the energy Zanak acquires to keep Queen Xanxia barely alive. The Doctor returns to the bridge and exposes the Captain's nurse as a hologram under the control of Queen Xanxia. The Queen believes that she has made her hologram nearly real. The Doctor tries, but fails, to convince her that the escalating energy needs of the time dam she is using will eventually cause her real body to die. The Doctor is made to walk a plank suspended over a sheer drop, then the Captain fires a gun at his feet until the Doctor loses his balance and falls as the Captain laughs evilly.

The Doctor has survived because it was only a projection of him that walked the plank. He has figured out the final piece of Queen Xanxia's puzzle, the device he found in the room with the body. Xanxia has been using the device to create an image for herself, disguised as the Captain's nurse. Xanxia is almost immortal because of the power of Zanak, which she uses to give permanent form to her image.

The Mentiads approach the bridge. They expect the Doctor to have taken control of the engine room by now, but because of the psychic interference transmitter, they are disadvantaged. The Captain seals the bridge as Zanak prepares to make the jump to Earth. Since Zanak's engines were damaged when the planet materialised in the same place as the TARDIS, the Doctor escapes and tries to employ the trick again to prevent Zanak from materialising, while the Mentiads do their best to sabotage Zanak's engines. Xanxia kills the Captain, who is saddened when Mr Fibuli dies, when he finally turns against her. The Doctor, Romana and the Mentiads destroy Zanak's bridge and Queen Xanxia, ending the devastation caused by Zanak's travels. In the aftermath, the Doctor and Romana collect the second segment of the Key to Time, which the Doctor had realised is the remains of Calufrax itself. They set off back to the TARDIS to search for the next segment.

DVD Region 1 US The Key to Time cover 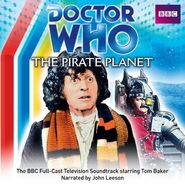 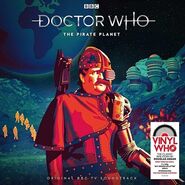 Novelisation and its audiobook[]