The Perfect Prisoners was the seventh and last story in the eighth series of The Fourth Doctor Adventures, produced by Big Finish Productions. It was written by John Dorney and featured Tom Baker as the Fourth Doctor, Jane Slavin as Anya Kingdom and John Leeson as K9 Mark II.

The Doctor, Ann and K9 are hot on the trail of the Syndicate, and straight into trouble.

After contending with killer robots and dangerous aliens, the clues lead straight to a machine that can literally make your dreams come true. A device that in the wrong hands could lead to misery for billions.

But who's the real villain here? And what exactly is their master plan?

Secrets have been revealed, and the Doctor and his friends at last know who they're fighting.

An epic journey across space leads them to the true mastermind of the Syndicate conspiracy.

Alliances will shift. Friends will die. Can even the Doctor come out of this alive? 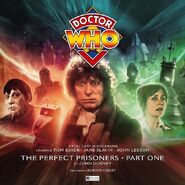 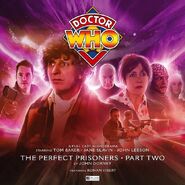