The Novel of the Film

The Novel of the Film was a novelisation of the 1996 TV movie, Doctor Who. It was written by Gary Russell published by BBC Books in conjunction with the film's broadcast in the United States, Canada and Great Britain on 16 May 1996. Though for copyright purposes known as simply Doctor Who, the book has a cover which sends ambiguous signals about its title. On the front cover it is entitled Doctor Who, but on the spine, it is Doctor Who - The Novel of the Film.

An altered version of the novelisation was published again by Target Books on 11 March 2021 under the new title of The TV Movie.

The book was significant for a number of reasons. It was the premiere release of a Doctor Who novel by BBC Books, which would completely take over the Doctor Who publishing license from Virgin by late 1997. It was also the first novelisation not appearing under the Target or Virgin labels and the first novelisation to be completed before the filmed version was. Its tight publication schedule meant that Russell wrote it with, as he put it in his foreword, "precious little visual reference". For this reason, the novel contains, as Russell predicted, things which "differ from what we all see on screen". This is especially true of some of the descriptions of the minor characters.

The book is further significant for being one of the few Doctor Who adaptations to be in British shops well prior to the debut of its parent episode on BBC One.

Late December, 1999: the brink of a new millennium. An anachronistic British Police Box materialises in San Francisco's Chinatown amid a hail of bullets which find an unintentional target — a strange man who walks out of the Police Box. Despite the best efforts of Dr Grace Holloway, the unknown traveller dies and his body vanishes. And soon another stranger appears, claiming to be the same man inside a different body; a mysterious wanderer in time and space known only as the Doctor.

But the Doctor is not the only time-traveller in San Francisco. His oldest adversary, the Master, is there as well, desperately trying to steal the Doctor's newly-regenerated body. Before long, the Doctor is faced with a choice: to save his own life, or the billions of people who have no future unless the Master is stopped. If only the Doctor could remember how...

It's December 1999, and strange things are happening as the new millennium nears. A British police box appears from nowhere in San Francisco’s Chinatown and the mysterious man inside it is shot down in the street. Despite the best efforts of Dr Grace Holloway, the man dies and another stranger appears, claiming to be the same person in a different body: a wanderer in time and space known only as the Doctor.

But the Doctor is not the only alien in San Francisco. His deadly adversary the Master is murdering his way through the city and has taken control of the TARDIS. The Master is desperate to take the Doctor’s newly regenerated body for himself, and if the Doctor does not capitulate, it will literally cost him the Earth…and every last life on it.

Deviations from the film[edit | edit source]

According to the introduction of the book, Russell wrote the adaptation based upon an early version of the script that wasn't the final one. As a result, the novel differs from the movie. It is hard to know, however, exactly which differences come from genuine ignorance of the final casting or costuming, on-set revisions of the script or which may have been Russell's embellishments that would have survived in the text even if Russell had seen the film first. In any event, this novelisation does differ from the final film more than the average Target novelisation did from its source material. Some examples:

The second edition had, among many inconsequential wording changes (such as morgue instead of body room or Lego bricks instead of Lego blocks for instance), some significant changes compared to the BBC edition generally being more in line with the movie dialogue, costumes and current context of the franchise. 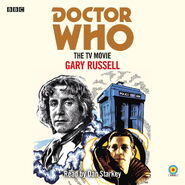