The Nightmare of Black Island (novel)

The Nightmare of Black Island

The Nightmare of Black Island was the tenth novel in the BBC New Series Adventures series. It was written by Mike Tucker and featured the Tenth Doctor and Rose Tyler.

On a lonely stretch of Welsh coastline a fisherman is killed by a hideous creature from beneath the waves. When the Doctor and Rose arrive, they discover a village where the children are plagued by nightmares, and the nights are ruled by monsters.

The villagers suspect that ancient industrialist Nathanial Morton is to blame, but the Doctor has suspicions of his own.

Who are the ancient figures that sleep in the old priory? What are the monsters that prowl the woods after sunset? What is the light that glows in the disused lighthouse on Black Island?

As the children's nightmares get worse, The Doctor and Rose discover an alien plot to resurrect an ancient evil...

Carl Jenkins was fishing off the coast of the small Welsh fishing village of Ynys Du as a thunderstorm hit. He started to head home when he noticed a green light coming from the supposedly disused lighthouse. Feeling around in his canvas fishing bag, he spiked his finger on the barb of one of his fishing hooks. But as he started cleaning up the blood, he heard a child's laughter, and something pulled hard at his fishing line. The source of the laughter was a young boy in pyjamas, who was pointing behind Carl at the thing which had pulled on his fishing line. The thing pulling on the fishing line was a brightly coloured monster covered in spines and barnacles with red eyes and barbed claws. The thing swiped its barbed claws at Carl, leaving behind only a pool of blood.

The Doctor's TARDIS tumbled through space as the Tenth Doctor fiddled with her wiring while Rose Tyler slept on the chair in the control room. Rose started stirring as her dreams took her to a beach in Britain where she saw a laughing child and a fisherman. Then, the thing came out of the water and attacked the fisherman with its barbed claws, killing him with one swoop of its arm. She woke with a start, and a quick conversation with the Doctor established that the TARDIS had experienced a similar dream. The Doctor managed to trace the origin of the dream, materialising on the stretch of coastline which Rose had been experiencing moments earlier.

The two travellers explored the coastline, noticing a figure in a white coat had gotten to where the fisherman used to be before them. By the time the Doctor and Rose had made it to the fisherman's spot, all that were left of him were puddles of blood; no body, no fishing equipment. As they left the bloody scene, the Doctor noticed a glimmer of light coming from the abandoned lighthouse, but it was off again before he could investigate. They headed on back to the village to talk to the locals and find some answers.

To get to the village, they had to go through a wood where they were attacked by creatures similar to and including the thing which attacked the fisherman in Rose's dream. The creatures seemed to not conform to any normal evolutionary process but were rather "thrown together". They managed to escape the creatures due to their relative smallness making it easier for them to pass through the woods until they reached a cul-de-sac as the wood opened up onto the village. The Doctor managed to prevent the monsters from following them further into the village by setting off all the car alarms in the estate with his screwdriver, the cacophony scaring the creatures away.

In the village pub, the Red Lion, many of the locals huddled over their drinks while a village meeting fell into the grip of old arguments. Ali Hardy, daughter of pub owners Beth and Mervyn Hardy, sobbed in her room as she tried to stay awake, to delay the onset of the nightly nightmares. Suddenly, the door to the outside opened and the Doctor and Rose stepped through it. Silence fell on the pub as the patrons spied the strangers, but Beth was hopeful when she heard that one of them was a doctor. Mervyn was less easily pacified, suspicious of the strangers who had managed to walk through the town unharmed. When questioned by the Doctor, he denied the existence of the monsters and told them to leave when he mentioned the fisherman's death. Luckily, Ali came down the stairs to see what the commotion was, bringing down a drawing of the monster that Rose saw. This was enough to break the tension in the room and let the villagers talk to the Doctor about what had been happening. It was revealed that the phone lines went dead whenever the monsters appeared, so the villagers couldn't call for help, and they scoffed at the thought that the authorities would believe them anyway. So they had managed to fit their lives around the monsters, coming inside at nightfall where the monsters couldn't get them. Bronwyn Ceredig then interrupted the conversation, accusing Nathaniel Morton of being behind it all as the monsters only started appearing after he had returned to Ynys Du and taken up residency in the rectory. This accusation was met with anger from the rest of the villagers who called her mad and told her to go away. Apparently she had been feuding with Morton for a while. Eventually, the patrons of the pub returned home, leaving in groups and walking as quickly as they could to avoid being in the open as much as possible. Deciding to visit the rectory and the light house once day had dawned, the Doctor and Rose spent the night in the pub, Rose in a guest room and the Doctor not sleeping as usual.

The Nightmare of Black Island paperback.jpg
Alternate cover without Rose 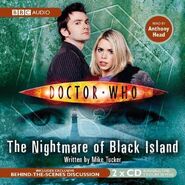